Researchers at UNSW have developed a graphene-based, laboratory-scale filter that can remove more than 99% of the natural organic matter left behind during conventional treatment of drinking water. In a research collaboration with Sydney Water, the team has demonstrated the success of the approach in laboratory tests on filtered water from the Nepean Water Filtration Plant in western Sydney, and is working to scale up the new technology. 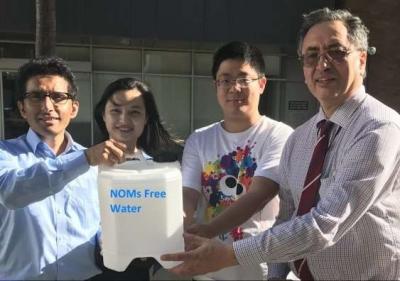 "Our advance is to use filters based on graphene – an extremely thin form of carbon. No other filtration method has come close to removing 99% of natural organic matter from water at low pressure," the UNSW team said. "Our results indicate that graphene-based membranes could be converted into an alternative new option that could in the future be retrofitted in conventional water treatment plants."

Sydney Water supplies clean water to about 4.8 million people in Sydney, the Illawarra and the Blue Mountains. These natural organic matter contaminants can affect the performance of direct filtration plants, reducing their capacity after heavy rain. "The most common methods used at present to remove organic matter from water supplies include the application of chemical coagulants," said the team. "However, these existing treatments are only partly effective, particularly as the concentration of natural organic matter is increasing."

The researchers explained that the new treatment system is made by converting naturally occurring graphite into graphene oxide membranes that allow high water flow at atmospheric pressure, while removing virtually all of the organic matter".

The UNSW team is upgrading the experimental rig to construct a small pilot plant that could be tested in the field.

In February 2018, scientists from the Australian Commonwealth Scientific and Industrial Research Organisation (CSIRO) have used their own type of graphene called "GraphAir" to develop a water filter membrane that is reportedly capable of making water from Sydney Harbor drinkable.