Researchers from Northwestern University have recently shown that graphene oxide paper can be made by mixing strong, solid GO flakes with weak, porous GO flakes. This finding may aid the production of higher quality GO materials, and also sheds light on a general problem in materials engineering: how to build a nano-scale material into a macroscopic material without losing its desirable properties. 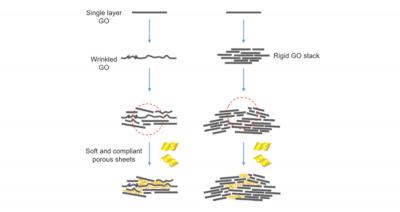 To put it in human terms, collaboration is very important, said Jiaxing Huang, Northwestern Engineering professor of materials science and engineering, who led the study. Excellent players can still make a bad team if they don’t work well together. Here, we add some seemingly weaker players and they strengthen the whole team.

The research was a four-way collaboration. In addition to Huang’s, three other groups participated, led by Horacio Espinosa, professor of mechanical engineering at the McCormick School of Engineering; SonBinh Nguyen, professor of chemistry at Northwestern; and Tae Hee Han, a former postdoc researcher at the University who’s now a professor of organic and nano engineering at Hanyang University, South Korea.

GO generally comes as a dispersion of tiny flakes in water. When a solution of GO flakes is poured onto a filter and the water removed, a thin paper is formed, usually a few inches in diameter with a thickness less than or equal to 40 micrometers. Inter-molecular forces alone hold the flakes together.

Scientists can make strong GO in single layers but layering the flakes into a paper form doesn’t work too well. While testing the effect of holes on the strength of GO flakes, Huang and his collaborators discovered a solution.

Using a mixture of ammonia and hydrogen peroxide, the researchers chemically etched holes in the GO flakes. Flakes left soaking for one to three hours were drastically weaker than un-etched flakes. After five hours of soaking, flakes became so weak they couldn’t be measured.

Things got even more interesting when the team mixed solid and porous flakes together, Huang said. Instead of weakening the paper made solely from solid flakes, the addition of 10 or 25% of the weakest flakes strengthened it by about 95 and 70%, respectively.

If GO sheets can be likened to aluminum foil, Huang said, making a GO paper is just like stacking the foil up to make a thick aluminum slab. If you start with large sheets of aluminum foil, chances are good that many will wrinkle, impeding tight packing between sheets. On the other hand, smaller sheets don’t wrinkle as easily. They pack together well but create tight stacks that don’t integrate well with other tight stacks, creating voids within GO paper where it can easily break.

Weak flakes warp to fill in those voids, which improves the distribution of forces throughout the material, Huang said. It’s a reminder that the strength of individual units is only part of the equation; effective connection and stress distribution is equally important.

This finding may be directly applicable to other two-dimensional materials, like graphene, Huang said, and will also lead to the design of higher quality GO products. He hopes to test it out on GO fibers next.