Graphene Flagship partner, Emberion, will be launching a VIS-SWIR graphene photodetector at Laser World of Photonics, from 24 to 27 June in Munich, Germany. The linear array covers a wide spectral range, detecting wavelengths from the visible at 400nm into the shortwave infrared up to 1,800nm. Traditionally, it would require both silicon and InGaAs sensors to image across this wavelength range. 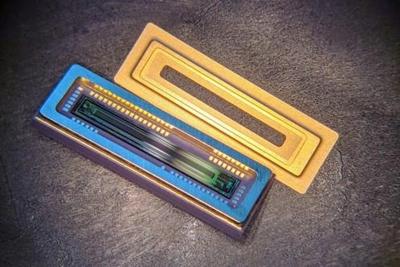 Emberion estimates that replacing a system using silicon and InGaAs sensors with its graphene photodetector would result in a 30% cost reduction.

Lantz added: ‘Our detector can offer similar performance to InGaAs in the near and shortware infrared region, and we outperform InGaAs in the visible region.’

‘Graphene’s unique properties and its compatibility to combine with other nanomaterials allowed us to create this cost-effective array for spectrometers,’ commented Tapani Ryhänen, CEO of Emberion. ‘Providing broad spectrum capabilities, without the expense of traditional InGaAs sensors, the VIS-SWIR graphene photodetector provides a digital output using Emberion’s in-house designed read out circuits – without the need to translate analogue data with additional components.’