In November 2017, First Graphene announced the official opening of its Commercial Graphene Facility (CGF). Now, the Company shared what it views as a significant milestone, "not just for the Company but also for the global graphene industry" - the commencement of production from its CGF at Henderson, Western Australia. 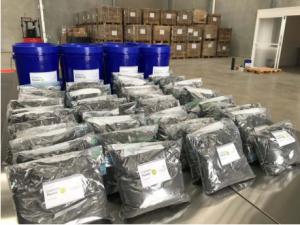 The facility has been reportedly constructed for less than the $1m budget previously advised. The Company has also installed a laboratory to perform constant quality assurance and control procedures. Having purchased its own Raman spectrograph, FGR is able to complete various testing procedures on its own premises.

The process employed by the Company to produce graphene was explained to have very low capital cost. The modular nature of the technology reportedly provides the ability to incrementally expand capacity within a very short time frame, to meet the expected high growth in demand in the future. The ability to use ultra-high-grade graphite direct from the mine, without having to undergo a concentration step, ensures a simple production method and underwrites what the Company believes to be the lowest cost production methodology available.

First Graphene is working closely with a number potential customers in Australia, Europe and North America, supplying trial parcels of graphene for testing and developing of application methods across a broad range of products including, but not limited to operators in the battery, concrete, fire retardant, paints and coatings and polymer businesses.