Researchers from Purdue University in the U.S have shown that a snowflake-like fractal design (in which the same pattern repeats at smaller and smaller scales) can increase graphene's inherently low optical absorption. This could lead to graphene photodetectors with an order-of-magnitude increase in photovoltage, along with ultrafast light detection and other advantages. 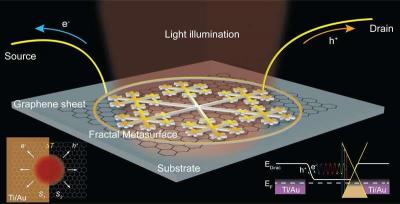 The research team explained that these characteristics can be directly attributed to the fractal pattern: "Our proposed fractal metasurface has the unique ability of supporting plasmonic resonances (free electron oscillations) over a wide spectral range in a polarization-insensitive way due to its complex and highly hexagonally symmetric geometry," the team said. "Previously reported plasmonic-enhanced graphene photodetectors use simpler narrowband and polarization-sensitive structures, and therefore the enhancement is also narrowband and polarization-sensitive."

As previous research has shown, the reason that a fractal pattern can improve optical absorption is that the fractal metasurface creates additional resonances, with the amount of resonance increasing as the number of fractal levels increases. In addition, the researchers here found that the fractal metasurface confines and enhances the electric field of the light that hits the surface. This ultimately leads to a higher photovoltage generated in the graphene photodetector.

The fractal metasurface enhances both effects in graphene photodetectors by increasing the electric field intensity and by heating via incident light in highly confined spaces.