The University of Michigan is currently developing a camera able to record 3D images and video, in a $1.2 million project funded the W.M. Keck Foundation. The camera will have graphene-based light detectors, and should be smaller than other existing models - as well as achieve higher resolutions. 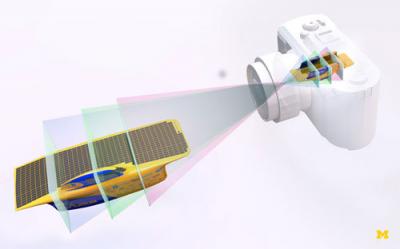 Light that hits camera detectors can come from different directions, which translates into spatial information that can be used to reconstruct 3D images; Normally, that information is lost because the detector only measures intensity, which is also the reason that 3D images made with traditional recording methods must be constructed from multiple shots. Existing one-shot 3D cameras rely on a micro-lens array to divert the light after it has been focused by the main lens. This array of smaller lenses recovers the directional information from the rays of light, and then the camera's software reconstructs the image along with the depth information.

The camera under development aims to bring an end to the micro-lens array. Instead, it will record the light as it passes through a series of transparent light detectors. This approach enables more information to be acquired without losing image resolution. It works because objects at different distances from the lens will come into focus at different points inside the camera, the researchers say. Objects will appear brightest where they are most in focus. Using this principle, it is much easier for the computer to reconstruct the images. The faster processing makes it possible to produce high speed and high-resolution video.

The team is considering an SLR-sized camera to begin with, but think it may be possible to get 3D-camera capabilities inside a smartphone. 3D cameras can be used for a variety of applications like 3D movie filming and, eventually, virtual reality. 3D films are currently made using multiple cameras to reconstruct each frame, but this new type of camera should be able to record in 3D on its own.