Researchers at Purdue University, the University of Michigan and Pennsylvania State University have combined graphene with a (comparatively much larger) silicon carbide substrate, creating graphene field-effect transistors which can be activated by light. This may lead to the development of highly sensitive graphene-based optical devices, an advance that could bring applications from imaging and displays to sensors and high-speed communications. 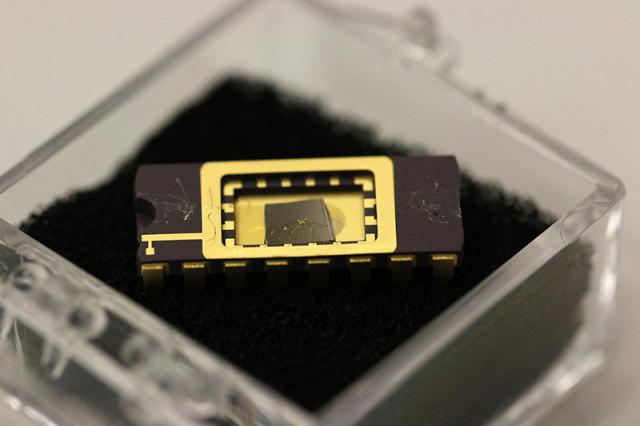 A typical problem of graphene-based photodetectors is that they have only a small area that is sensitive to light, limiting their performance. “In typical graphene-based photodetectors demonstrated so far, the photoresponse only comes from specific locations near graphene over an area much smaller than the device size,” the team said. “However, for many optoelectronic device applications, it is desirable to obtain photoresponse and positional sensitivity over a much larger area”. The researchers tackled exactly this in their new work.

The device was shown to be responsive to light even when the silicon carbide is illuminated at distances far from the graphene. The performance can be increased by as much as 10 times depending on which part of the material is illuminated. The new phototransistor also is “position-sensitive,” meaning it can determine the location from which the light is coming, which is important for imaging applications and for detectors.

“This is the first time anyone has demonstrated the use of a small piece of graphene on a large wafer of silicon carbide to achieve non-local photodetection, so the light doesn’t have to hit the graphene itself,” the researchers said.

The silicon carbide is “un-doped,” unlike conventional semiconductors in silicon-based transistors. Being un-doped makes the material an insulator unless it is exposed to light, which temporarily causes it to become partially conductive, changing the electric field on the graphene. “This is a novelty of this work” according to the team.

The research is related to work to develop new graphene-based sensors designed to detect radiation and was funded with a joint grant from the National Science Foundation and the U.S. Department of Homeland Security and another grant from the Defense Threat Reduction Agency.