Researchers from the University of Exeter have developed a new technique that could create a highly sensitive graphene biosensor with the capability to detect molecules of the most common lung cancer biomarkers. 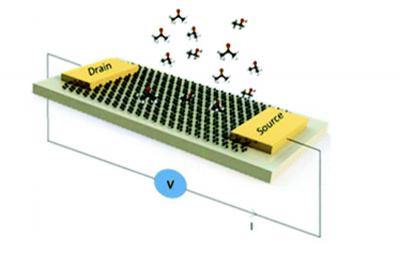 The new biosensor design could revolutionize existing electronic nose (e-nose) devices, that identify specific components of a specific vapor mixture—like a person's breath—and analyze its chemical make-up to identify the cause.

The research team believes the newly developed device has the potential to identify specific lung cancer markers at the earliest possible stage, in a convenient and reusable way—making it both cost-effective and highly beneficial for health service providers worldwide.

Ben Hogan, a postgraduate researcher from the University of Exeter and co-author of the paper explained: "The new biosensors which we have developed show that graphene has significant potential for use as an electrode in e-nose devices. For the first time, we have shown that with suitable patterning graphene can be used as a specific, selective and sensitive detector for biomarkers". "We believe that with further development of our devices, a cheap, reusable and accurate breath test for early-stage detection of lung cancer can become a reality".

Using patterned multi-layered graphene electrodes, the team members were able to show greater sensing capabilities for three of the most common lung-cancer biomarkers—ethanol, isopropanol and acetone—across a range of different concentrations.

The team believes this could be the first step towards creating new, improved and cheaper e-nose devices that could give the earliest possible lung-cancer diagnosis.