A team of researchers at the University of California, San Diego, is developing a chip that has a graphene field effect transistor which contains a DNA probe. The double-stranded DNA has a sequence coding engineered to detect DNA or RNA with a specific single nucleotide mutation. An electrical signal is produced by the chip whenever this targeted type of DNA or RNA binds to the probe.

Attached to the probe is a regular strand of DNA, and bonded to this strand is a “weak” strand. The weak strand has four G’s in its sequence replaced with inosines, effectively weakening its bond. Together, the two strands create a double helix which operates DNA strand displacement. Any DNA strands which perfectly complement the normal strand will bind to the normal strand, and the weak strand will be knocked off. Because the DNA probe is connected to the graphene transistor, the chip is able to operate electronically. Eventually, this information could then be wirelessly transmitted to a mobile device.

The double-stranded probe also offers greater selectivity than more common single-stranded DNA probes. Only perfectly matched DNA strands to the normal strand are able to displace the weak strand of the probe. As a result of using a double-stranded helix, the probe can also be longer. Thus, the chip is able to scan longer segments of DNA for mutations. The longer the probe, the more certain the DNA sequence is unique in the genome. 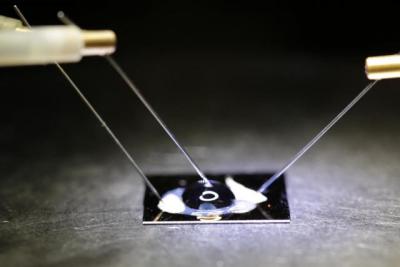 The biosensor chip offers a new method of detecting the most common genetic mutation, a single nucleotide polymorphism (SNP). SNP is a variation of a single nucleotide base in the DNA sequence. Some SNPs are associated with cancer, diabetes, and neurodegenerative disorders, among other pathological conditions.

This technology could one day be applied to a variety of medical situations. Blood-based tests for early cancer screening, monitoring disease biomarkers, and realtime detection of viral and microbial sequences are all candidates for this technology.

The next stage for the development of this technology is scaling up, as well as the addition of wireless capability.