Thermal transport in graphene is a thriving area of research, thanks to graphene's extraordinary heat conductivity properties and its potential for use in thermal management applications.

Graphene is considered an excellent heat conductor, and several studies have found it to have unlimited potential for heat conduction based on the size of the sample, contradicting the law of thermal conduction (Fourier’s law) in the micrometer scale. In both computer simulations and experiments, the researchers found that the larger the segment of graphene, the more heat it could transfer. Theoretically, graphene could absorb an unlimited amount of heat.

The thermal conductivity increases logarithmically, and researchers believe that this might be due to the stable bonding pattern as well as being a 2D material. As graphene is considerably more resistant to tearing than steel and is also lightweight and flexible, its conductivity could have some attractive real-world applications.

But what exactly is thermal conductivity?

Heat conduction (or thermal conduction) is the movement of heat from one object to another, that has a different temperature, through physical contact. Heat can be transferred in three ways: conduction, convection and radiation. Heat conduction is very common and can easily be found in our everyday activities - like warming a person’s hand on a hot-water bottle, and more. Heat flows from the object with the higher temperature to the colder one.

Thermal transfer takes place at the molecular level, when heat energy is absorbed by a surface and causes microscopic collisions of particles and movement of electrons within that body. In the process, they collide with each other and transfer the energy to their “neighbor”, a process that will go on as long as heat is being added.

How can graphene’s exciting thermal conduction properties be put to use?

Some of the potential applications for graphene-enabled thermal management include electronics, which could greatly benefit from graphene's ability to dissipate heat and optimize electronic function. In micro- and nano-electronics, heat is often a limiting factor for smaller and more efficient components. Therefore, graphene and similar materials with exceptional thermal conductivity may hold an enormous potential for this kind of applications.

Graphene’s heat conductivity can be used in many ways, including thermal interface materials (TIM), heat spreaders, thermal greases (thin layers usually between a heat source such as a microprocessor and a heat sink), graphene-based nanocomposites, and more.

Billabong's Furnace range of wet-suites, enhanced with graphene materials, are now shipping. Billabong is offering a full range of Furnace suits which are all made from recycled nylon fibers infused with graphene to increase warmth and performance. 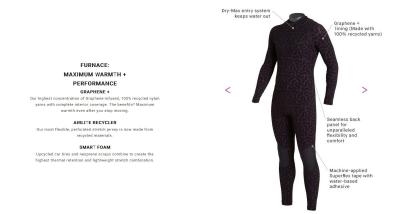 The suits are now shipping globally, starting at around $175 for the Men's 3/2 Absolute Back Zip Wetsuit.

Researchers at Sweden-based Chalmers University of Technology, in collaboration with researchers in China and Italy, have found that graphene-based heat pipes can help solve the problems of cooling electronics and power systems used in avionics, data centers, and other power electronics. 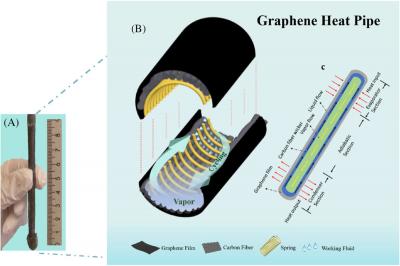 A) Image of a real GHP; B) schematic designing of the GHP; C) working principle of the GHP

Electronics and data centers need to be efficiently cooled and rid of excess heat in order to function properly. Currently, heat pipes are usually made of copper, aluminum or their alloys. Due to the relatively high density and limited heat transmission capacity of these materials, heat pipes are facing severe challenges in future power devices and data centers.

Last month MSI revealed that it is utilizing graphene composites in its RTX 3000 series GPUs. The new graphic cards are now shipping globally (the cost in the US is $1,699). 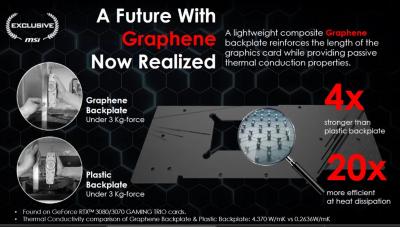 MSI uses a graphene composite material as the backplate of the GPU, which is traditionally made of plastic. MSI says that the graphene composite is 4X stronger than its previous plastic backplate, and offers much higher (20X) heat dissipation performance.

MSI, a global computer hardware manufacturer, has revealed that it is utilizing graphene composites in its RTX 3000 series GPUs.

It seems that the graphene composite parts are replacing the backplate, traditionally made of plastic, and provide greater heat dissipation performance and better stiffness to handle the weight of the entire card while still weighing less than plastics.