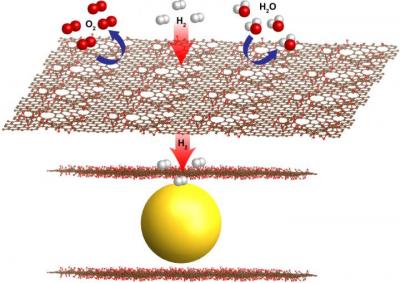 The graphene shields the nanocrystals from oxygen, moisture and contaminants, while tiny, natural holes allow the smaller hydrogen molecules to pass through. This filtering process overcomes common problems degrading the performance of metal hydrids for hydrogen storage. The graphene-encapsulated magnesium crystals act as "sponges" for hydrogen, offering a very compact and safe way to take in and store hydrogen. The nanocrystals also permit faster fueling, and reduce the overall size.

The scientists explain that a roadblock to metal hydride storage has been a relatively slow rate in taking in (absorption) and giving out (desorption) hydrogen during the cycling of the units. In fuel cells, separate chemical reactions involving hydrogen and oxygen produce a flow of electrons that are channeled as electric current, creating water as a byproduct. The tiny size of the graphene-encapsulated nanocrystals created at Berkeley Lab, which measure only about 3-4 nanometers, is a key in the new fuel cell materials' fast capture and release of hydrogen, as they have more surface area available for reactions than the same material would at larger sizes. Another key is protecting the magnesium from exposure to air, which would render it unusable for the fuel cell.

The described process is a simple, scalable and cost-effective "one pan" technique to mix up the graphene sheets and magnesium oxide nanocrystals in the same batch. The researchers later studied the coated nanocrystals' structure using X-rays at Berkeley Lab's Advanced Light Source. The X-ray studies showed how hydrogen gas pumped into the fuel cell mixture reacted with the magnesium nanocrystals to form a more stable molecule called magnesium hydride while locking out oxygen from reaching the magnesium.

According to the researchers, this work suggests the possibility of practical hydrogen storage and use in the future. These materials may represent an applicable approach to stabilizing reactive materials while still harnessing their unique activity, concepts that could have wide-ranging applications for batteries, catalysis, and energetic materials. The next steps in the research will focus on using different types of catalysts, which can improve the speed and efficiency of chemical reactions, to further improve the fuel cell's conversion of electrical current, and in studying whether different types of material can also improve the fuel cell's overall capacity.