» Honey can be used as a cheap and safe material for...

A rather accidental discovery was recently made that honey can serve as an effective, non-toxic substitute for the manipulation of the current and voltage characteristics of graphene. Researchers at the Space and Naval Warfare Systems Center Pacific (SSC Pacific) were investigating various dielectric materials they could use to fabricate a graphene transistor; First, the team tried to utilize water as a top-gate dielectric to manipulate graphene's electrical conductivity, but this approach was unsuccessful, so they proceeded with various compositions of sugar and deionized water, which still resulted in negligible performance. When testing honey, however, an unexpected scientific discovery was made. 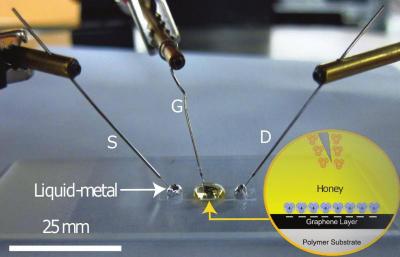 The team describes how honey produces a nanometer-sized electric double layer at the interface with graphene that can be used to gate the ambipolar transport of graphene. "As a top-gate dielectric, water is much too conductive, so we moved to sugar and de-ionized water to control the ionic composition in hopes we could reduce conductivity," the team explained. "However, sugar water didn't work for us either because, as a gate-dielectric, there was still too much leakage current..... We decided to drop-cast honey on graphene to act as top-gate dielectric— I thought maybe the honey would mimic dielectric gels I read about in literature. To our surprise—everyone said it's not going to work—we tried and it did".

The team from SSC Pacific, in collaboration with the University of Hawai′i at Mānoa, have been developing novel graphene devices as part of a Navy Innovative Science and Engineering (NISE)-funded effort to imbue the Navy with inexpensive, lightweight, flexible graphene-based devices that can be used as next-generation sensors and wearable devices.

"Traditionally, electrolytic gate transistors are made with ionic gel materials," the researchers said. "But you must be proficient with the processes to synthesize them, and it can take several months to figure out the correct recipe that is required for these gels to function in the environment. Some of the liquids are toxic, so experimentation must be conducted in an atmospheric-controlled environment. Honey is completely different—it performs similarly to these much more sophisticated materials, but is safe, inexpensive, and easier to use. The honey was an intermediate step towards using ionic gels, and possibly a replacement for certain applications."

The scientists envision the honey-based version of graphene products being used for rapid prototyping of devices, since the devices can be created quickly and easily redesigned based on results. Instead of having to spend months developing the materials before even beginning to incorporate it into devices, using honey allows the team to get initial tests underway without waiting for costly fabrication equipment. They also see a use for such products in science, technology, engineering and math (STEM) outreach efforts, since the honey is non-toxic and could be used to teach students about graphene.