Researchers at Tsinghua University have used lasers to make graphene on Kevlar textiles, creating protective clothing that can record the wearer’s electrocardiogram (ECG) or sense a toxic gas. 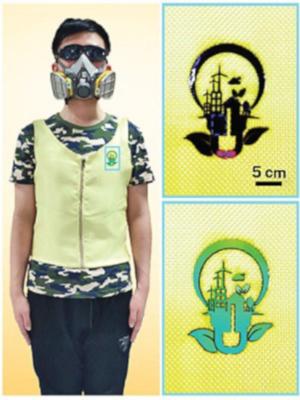 Prototype of an intelligent protective vest based on the Kevlar-laser induced graphene textile (left) with a gas sensor and battery embedded in a design on the vest (top right) also shown in false color (bottom right). Credit: ACS Nano

Yingying Zhang and colleagues at Tsinghua University used a carbon dioxide laser to write on Kevlar, a synthetic polyamide fiber generally used to make body armor and personal protective clothing. The laser burned and depolymerized the Kevlar fibers and the carbon atoms recombined to form graphene, as shown by Raman spectroscopy. Using a motorized setup for the laser, they were able to scribe any design on the textile in minutes.

The team used the technique to make a zinc-air battery, where one of the battery electrodes was the graphene-Kevlar textile coated with a cobalt oxide compound and the other electrode was zinc. Three such flexible batteries connected in series powered a green LED light on the fabric, which remained lit even when the fabric was flexed.

The graphene-Kevlar electrodes could also detect toxic nitrogen dioxide, sensing as little as 10 ppm with high selectivity. The team then combined the Zn-air batteries and the gas sensor to make a self-powered gas sensor textile. A fully charged battery could provide power to the gas sensor for about 12 h. In addition, the researchers also showed a high quality ECG signal using the graphene-Kevlar electrode textile wrapped around a volunteer’s arm, useful for making protective clothing that is also capable of monitoring a person’s vitals in the field.