India-based clean-tech startup Log 9 has supplied graphene-enhanced oil absorbent pads 'Sorbene' to clean up a major oil spill off the coast of Mauritius. 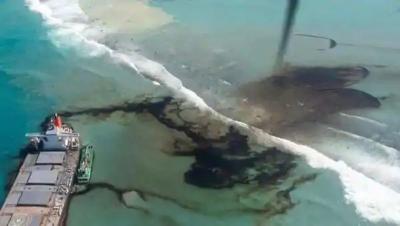 A Japanese-firm owned bulk carrier vessel 'MV Wakashio' ran aground on a reef at Pointe d'Esny along Mauritius' south-eastern coastal region on July 25, spilling more than 1,000 tonnes of oil into the Indian Ocean. The spill sparked off fears of an ecological catastrophe.

The Mauritian government has declared a state of 'environmental emergency' in the country after the spill threatened flora and fauna of nearby wetlands and the centuries-old live corals.

India has been assisting Mauritius in dealing with the crisis and has rushed a 10-member response team from the Indian Coast Guard along with 30 tonnes of specialized equipment for the clean-up operations.

Dhananjay Sharma, CEO of Log 9, said the graphene-based Sorbene pads are able to absorb large volumes of oil and can be reused for up to 6-7 times so that the sorbents can provide more recovery of spilled oil. In addition, Sorbene's absorbent pads also absorb oil up to 86 times their weight.

"We are confident these pads shall prove to be instrumental in increasing the efficacy of the oil spill response team by helping them to clean up oil and petrochemicals faster and in larger volumes," he said.

Log 9 Spill, the statement said, has been supplying its products to shipping industries, dockyards, oil and gas companies, and chemical industries in India and across many countries of the world.

This is however for the first that the Sorbene products are used to clean up a major ocean disaster.

"Products such as highly absorbent, reusable Sorbene pads produced by us can not only reduce the number of pads required for clean-up but they also help in reducing the disposal quantities," said Akshay Singhal, founder and CEO, Log 9 Materials.

Sorbene pads possess high elasticity and their hydrophobic nature makes it difficult to get wet and helps in efficiently absorbing spill from land, cracks or water bodies.