Researchers from Jagiellonian University in Poland, Oak Ridge National Laboratory in the U.S, Espeem S.A.R.L in Luxembourg and Friedrich Alexander University(FAU) in Germany have designed a method of forming nanographenes on metal oxide surfaces. 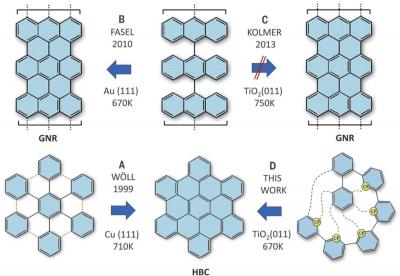 The team explains that in order to create an electronic circuit, the molecules of graphene must be synthesized and assembled directly on an insulating or semi-conductive surface. Although metal oxides are the best materials for this purpose, in contrast to metal surfaces, direct synthesis of nanographenes on metal oxide surfaces is not possible as they are considerably less chemically reactive. The researchers would have to carry out the process at high temperatures, which would lead to several uncontrollable secondary reactions. The team has now developed a method for synthesizing nanographenes on non-metallic surfaces, that is insulating surfaces or semi-conductors.

The researchers' method involves using a carbon fluorine bond, which is the strongest carbon bond. It is used to trigger a multilevel process. The desired nanographenes form like dominoes via cyclodehydrofluorination on the titanium oxide surface. All 'missing' carbon-carbon bonds are thus formed after each other in a formation similar to a zip being closed. This enables the researchers to create nanographenes on titanium oxide, a semi-conductor.

This method also allows them to define the shape of the nanographene by modifying the arrangement of the preliminary molecules. New carbon-carbon bonds and, ultimately, nanographenes form where the researchers place the fluourine atoms.

These research results demonstrate how carbon-based nanostructures can be manufactured by direct synthesis on the surfaces of technically-relevant semi-conducting or insulating surfaces. 'This groundbreaking innovation offers effective and simple access to electronic nanocircuits that really work, which could scale down existing microelectronics to the nanometre scale,' explains Dr. Amsharov, co-researchers in this work.