» A novel graphene-based method to view proteins may help...

Researchers attempt to learn more about diseases like Alzheimer’s and Parkinson’s by focusing on protein filaments that form fibrous clusters called amyloids in the brain. Until now, the best tools for studying them have generated limited views, largely because the strands are complex and tiny, just a few nanometers thick. 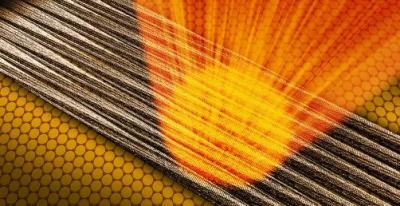 Now, an international research team has come up with a new method to potentially reveal the structure of individual amyloid fibrils with powerful beams of X-ray laser light. In experiments conducted at the Linac Coherent Light Source (LCLS) at the Department of Energy’s SLAC National Accelerator Laboratory, the scientists placed up to 50 fibrils at a time on a layer of graphene and hit them with bursts of X-ray laser light. The graphene, it turned out, was almost transparent to the X-rays, and this allowed them to probe the structures of the delicate fibrils without picking up significant extraneous signals from the graphene layer in individual snapshots.

While the team did not uncover the complete fibril structure, they said the innovative method opens up a promising path for amyloid studies using X-ray free-electron lasers, or XFELs, such as LCLS.

Accurate information about the structure of amyloid fibrils can inform scientists about their role in the development of neurodegenerative diseases.

Earlier attempts to study fibrils at X-ray lasers delivered them into the path of the beam in jets of fluid. Switching to a solid graphene carrier gave the team two advantages; Since graphene is just one layer of atoms thick, it leaves hardly a trace in the diffraction patterns formed by X-rays scattering off the fibrils, which are used to determine their structures, the researchers said. And the regular structure of the graphene encourages the fibrils to all line up in the same direction.

This allows diffraction patterns to be obtained from fewer than 50 amyloid fibrils. Based on the results, the team hopes to eventually get patterns from single fibrils. To get to that goal, new methods of exposing a single fibril to the XFEL beam will need to be developed.

The exceptionally bright and narrowly focused beam at LCLS’s Coherent X-ray Imaging instrument was also key to the team’s success in taking data from such a small number of fibrils, according to SLAC staff scientist Mengning Liang.

Intense X-ray pulses at XFELs limit the exposure of delicate samples to damaging X-rays. In this study, the fibrils were exposed for only a few femtoseconds, or millionths of a billionth of a second. Before the molecules are destroyed, information about their structure can be read by detectors.

The scientists tested their method on samples of well-studied tobacco mosaic virus filaments and smaller amyloid fibrils, some of which are associated with certain types of cancer. The tests produced structural data with a high degree of accuracy: The resolution in the diffraction images was almost on the scale of a single atom.