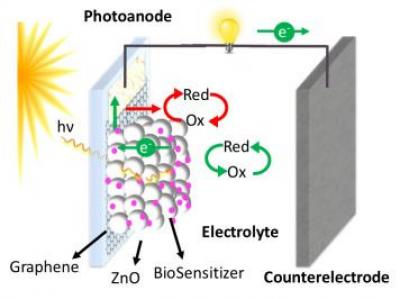 A biophotovoltaic cell integrates biological materials as functional elements in the solar cell. Instead of silicon, the researchers use the protein bacteriorhodopsin, found in halobacteria from salty lakes, as the component that captures sunlight in the device. Halobacteria are an ancient group of microbes that live in water too salty to sustain most other forms of life. They produce a purple protein called bacteriorhodopsin that absorbs energy from sunlight and uses it to transport protons, along with their electrical charge, as an energy source that sustains the organism’s biological functions.

Bacteriorhodopsin offers a potentially more environmentally friendly and effective alternative to silicon because it naturally converts solar radiation into electricity and can be produced with very little environmental impact.

The researchers integrate carbon nanomaterials like graphene to replace traditional transparent conductors. They now aim to improve the design of the device to increase power conversion efficiency by exploring the charge transfer mechanisms at the interfaces of the device.