Researchers from Moscow Institute of Physics and Technology (MIPT), in collaboration with researchers from other Russian institutions, have designed a way to acquire 2D graphene-like layers of various rock salts. Thanks to the unique properties of atomically thin materials, this opens up fascinating prospects for nanoelectronics. Based on the computer simulation, they derived the equation for the number of layers in a crystal that will produce ultrathin films with potential applications in nanoelectronics. 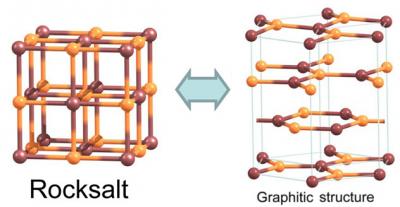 Previous theoretical studies suggested that under certain conditions, films with a cubic structure and ionic bonding could spontaneously convert to a layered hexagonal graphitic structure in what is known as graphitisation. However, there was very little experimental data to make any practical use of this proposal.

In general, as the slab of the crystal becomes thinner, the dipole moment of it as the whole system increases, resulting in the increase of the surface energy. At some point it becomes more energetically favorable for atoms of the film to make a transition from a normal cubic structure to a hexagonal and then split into 2D layers similar to graphene.

To study how graphitisation tendencies vary depending on the compound, the researchers examined 16 binary compounds with the general formula AB, where A stands for one of the four alkali metals lithium Li, sodium Na, potassium K, and rubidium Rb. These are highly reactive elements found in Group 1 of the periodic table. The B in the formula stands for any of the four halogens fluorine F, chlorine Cl, bromine Br, and iodine I. These elements are in Group 17 of the periodic table and readily react with alkali metals.

To test their choice of methods and parameters, the researchers simulated two crystal lattices and calculated the pressure that corresponds to the phase transition between them. Their predictions agree with experimental data.

Based on the data, the researchers established a relationship between the critical number of layers and two parameters that determine the strength of the ionic bonds in various compounds. The first parameter indicates the size of an ion of a given metal—its ionic radius. The second parameter is called electronegativity and is a measure of the А atom’s ability to attract the electrons of element B. Higher electronegativity means more powerful attraction of electrons by the atom, a more pronounced ionic nature of the bond, a larger surface dipole, and a lower critical slab thickness.

The team states that his work has already attracted the attention of colleagues from Israel and Japan. If they confirm the findings experimentally, this phenomenon [of graphitisation] will provide a viable route to the synthesis of ultrathin films with potential applications in nanoelectronics.

The scientists intend to broaden the scope of their studies by examining other compounds. They believe that ultrathin films of different composition might also undergo spontaneous graphitisation, yielding new layered structures with properties that are even more intriguing.