» Researchers use graphene oxide to design a low-cost...

Researchers at MIT and National Chiao Tung University have designed a graphene oxide-based system that could make it possible to capture and analyze individual cells from a small sample of blood, potentially leading to very low-cost diagnostic systems that could be used almost anywhere. 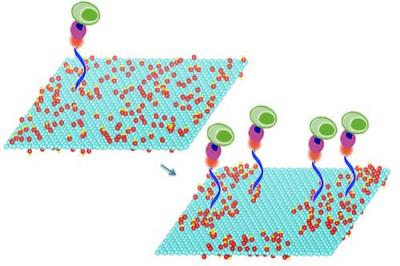 The new system, based on specially treated sheets of graphene oxide. The team explains that the key to the new process is heating the graphene oxide at relatively mild temperatures. This low-temperature annealing makes it possible to bond particular compounds to the material's surface. These compounds in turn select and bond with specific molecules of interest, including DNA and proteins, or even whole cells. Once captured, those molecules or cells can then be subjected to a variety of tests.

While many other attempts to design such devices efficiently were made in the last decade, most of these relied on external modifications, such as surface patterning through lithographic fabrication techniques, or adding microfluidic channels, which add to the cost and complexity. The new finding offers a mass-producible, low-cost approach to achieving such improvements in efficiency. The new research demonstrates how that basic process could potentially enable a suite of low-cost diagnostic systems, for example for cancer screening or treatment follow-up.

For the proof-of-concept test, the team used molecules that can quickly and efficiently capture specific immune cells that are markers for certain cancers. They were able to demonstrate that their treated graphene oxide surfaces were almost twice as effective at capturing such cells from whole blood, compared to devices fabricated using ordinary, untreated graphene oxide, says the paper's lead author.

The system has other advantages as well - it allows for rapid capture and assessment of cells or biomolecules under ambient conditions within about 10 minutes and without the need for refrigeration of samples or incubators for precise temperature control. In addition, the whole system is compatible with existing large-scale manufacturing methods, making it possible to produce diagnostic devices for less than $5 apiece, the team estimates. Such devices could be used in point-of-care testing or resource-constrained settings.

The researchers found that increasing the annealing time steadily increased the efficiency of cell capture: After nine days of annealing, the efficiency of capturing cells from whole blood went from 54%, for untreated graphene oxide, to 92% for the treated material. The team then performed molecular dynamics simulations to understand the fundamental changes in the reactivity of the graphene oxide base material.

The new system, which the group has patented, requires no chemical pretreatment and an annealing temperature of just 50 to 80 degrees Celsius (122 to 176 F). In principle, many different tests could be incorporated on a single device, all of which could be placed on a small glass slide like those used for microscopy.