Nanotek Instruments and its subsidiary Angstron Materials developed a new graphene-based energy storage device - something between a battery and a supercapacitor. The new device is called graphene surface-enabled lithium ion-exchanging cells, or surface-mediated cells (SMCs). 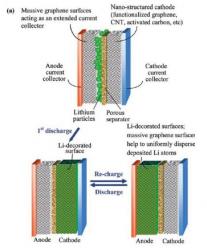 Nanotek says that even the first generation devices (which aren't optimized yet) feature fast recharge cycles - and already outperform both supercapacitors and lithium-ion batteries. Recharge time is 10 times faster than supercapcitor and 100 times faster than lithium ion while energy capacity is the same as Li-ion batteries and 30 times higher than conventional supercapacitors.

SMCs gets their amazing performance by using a cathode and anode that contain very large graphene surfaces. When fabricating the cell, the researchers put lithium metal (in the form of particles or foil) at the anode. During the first discharge cycle, the lithium is ionized, resulting in a much larger number of lithium ions than in Li-ion batteries. As the battery is used, the ions migrate through a liquid electrolyte to the cathode, where the ions enter the pores and reach the large graphene surface inside the cathode. During recharging, a massive flux of lithium ions quickly migrates from the cathode to the anode. The electrodes’ large surface areas enable the rapid shuttling of large numbers of ions between electrodes, resulting in their high power and energy densities.

The exchange of lithium ions between the porous electrodes’ surfaces (and not in the bulk of the electrode, as in batteries) removes the need for intercalation - a time-consuming process.

They say that it will be easy to commercialize SMCs - but graphene is still very expensive, and it will take 1-3 years (according to Angstron Materials) to dramatically reduce the price.