» Standard Graphene teams up with Flvics to develop...

Two businesses have formed a collaboration to explore the development of a graphene-based archery arrow to aim at the global sporting arrow market which is currently dominated by U.S. Easton. 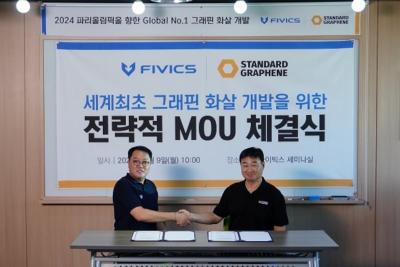 Arrow products account for one sixth of the $5.2 billion worldwide market of archery equipment and accessories used in sporting, leisure and hunting activities, according to Baek Jong-dae, CEO of archery gears maker Fivics, and Standard Graphene CEO Lee Jung-hoon. The two CEOs believe their technology can compete in this market, once their graphene-based arrows are adopted and used for better performance by players in Korea, the current champion country in Olympic archery.

“The gaming arrow made by the American company uses carbon fiber around an aluminum pipe, but there will be a huge difference in performance between this conventional arrow and our new graphene,” said Baek, who played archery during his school years. “Graphene arrows are lighter and have stronger physical properties. They fly faster and are less affected by wind due to improved durability and vibration damping.”

Fivics is a leading distributor of archery arrows for school training and accessories such as protective finger taps with a 70% market share in Korea. The company is also the developer of the world’s first water-proof paper target, which was used in Tokyo Olympics.