Researchers at Forschungszentrum Jülich that have studied how the structure of the substrate material influences the doping process in graphene, discovered unexpected effects and found that effective doping depends on the choice of substrate material. 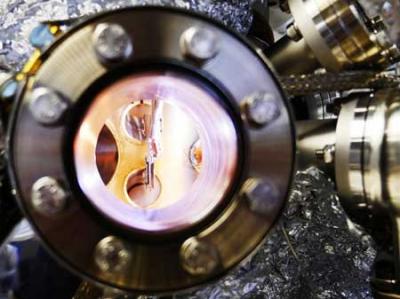 Scientists have been testing silicon carbide (a crystalline compound of silicon and carbon) for use as a substrate material for graphene. When the material is heated to more than 1400 degrees Celsius in an argon atmosphere, graphene can be grown on the crystal. However, this “epitaxial monolayer graphene” displays -albeit slight — interaction with the substrate, which limits its electron mobility. In order to circumvent this problem, hydrogen is introduced into the interface between the two materials. This method is known as hydrogen intercalation. The bonds between the graphene and the substrate material are separated and saturated by the hydrogen atoms. This suppresses the electronic influence of the silicon crystal while the graphene stays mechanically joined with the substrate: quasi-free-standing monolayer graphene.For practical applications, the electrical properties of graphene must be modifiable — for example by introducing additional electrons into the material. For this process, known as doping, the graphene is bombarded with nitrogen ions and then annealed. This results in defects in the lattice structure: some few carbon atoms separate from the lattice and are replaced with nitrogen atoms, which bring along additional electrons.

The research team doped samples of epitaxial and quasi-free-standing monolayer graphene and investigated its structural and electronic properties. By means of standing X-ray wave fields, they were able to scan both graphene and substrate at a precision of a few millionths of a micrometer. Their findings were surprising: some of the nitrogen atoms diffused from the graphene into the silicon carbide. It was previously believed that the nitrogen bombardment only affected the graphene, but not the substrate material.

Although both samples were treated in the same way, they exhibited different nitrogen concentrations, but almost identical electronic doping: not all nitrogen atoms were integrated in the graphene lattice, nevertheless the number of electrons in the graphene rose as if this were the case. The key to this unexpected result lies in the different behavior of the interface layers between graphene and substrate. For the epitaxial graphene, nothing changed: the interface layer remained stable, the structure unchanged. In the quasi-free-standing graphene, however, some of the hydrogen atoms between graphene and substrate were replaced with nitrogen atoms. The researchers explained that upon examination of the quasi-free-standing graphene, a nitrogen atom can be found underneath the graphene coat in some places. These nitrogen atoms, although they are not part of the graphene, can dope the lattice without destroying it. This unforeseen result is very promising for future applications in micro- and nanoelectronics.