A research team, led by Brown University physicists, has found a new way to precisely probe the nature of the superconducting state in magic-angle graphene. The technique enables researchers to manipulate the repulsive force - the Coulomb interaction - in the system. In their recent study, the researchers showed that magic-angle superconductivity grows more robust when Coulomb interaction is reduced, which could be an important piece of information in understanding how this superconductor works.

"This is the first time anyone has demonstrated that you can directly manipulate the strength of Coulomb interaction in a strongly correlated electronic system," said Jia Li, an assistant professor of physics at Brown and corresponding author of the research. "Superconductivity is driven by the interactions between electrons, so when we can manipulate that interaction, it tells us something really important about that system. In this case, demonstrating that weaker Coulomb interaction strengthens superconductivity provides an important new theoretical constraint on this system."

When two sheets of graphene are stacked atop each other at just the right angle, the layered structure morphs into an unconventional superconductor, allowing electric currents to pass through without resistance or wasted energy. This magic-angle transformation in bilayer graphene was observed for the first time in 2018 in the group of Pablo Jarillo-Herrero at MIT. Since then, scientists have searched for other materials that can be similarly twisted into superconductivity, but for the most part, no other twisted material has exhibited superconductivity other than the original twisted bilayer graphene.

Illustrations of A-tw-A stacking (a) and A-tw-B stacking (b). Image from Nature

In a recent paper, Jarillo-Herrero and his group reported observing superconductivity in a sandwich of three graphene sheets, the middle layer of which is twisted at a new angle with respect to the outer layers. This new trilayer configuration reportedly exhibits superconductivity that is more robust than its bilayer counterpart.

Researchers from Australia's Monash University, U.S Naval Research Laboratory, University of Maryland and IMDEA Nanociencia in Spain have confirmed what actually happens to calcium atoms that are added to graphene in order to create a superconductor: surprisingly, the calcium goes underneath both the upper graphene sheet and a lower ‘buffer’ sheet, ‘floating’ the graphene on a bed of calcium atoms. 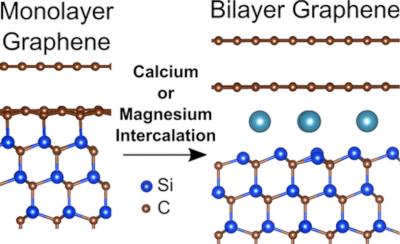 In 2018, researchers made the surprising discovery that when you layer two sheets of single-atom-thick graphene atop one another and rotate them by precisely 1.05 degrees with respect to one another, the resulting bilayer material takes on new properties: when the density of electrons in the material is increased through the application of a voltage on a nearby electrode, it becomes a superconductorâelectrons can flow freely through the material, without resistance. However, with a slight change in electron density, the bilayer becomes an insulator and prevents the flow of electrons.

A team of researchers at Princeton has looked for the origins of the unusual behavior known as magic-angle twisted bilayer graphene, and detected signatures of a cascade of energy transitions that could help explain how superconductivity arises in this material.

"This study shows that the electrons in magic-angle graphene are in a highly correlated state even before the material becomes superconducting, "said Ali Yazdani, Professor of Physics and the leader of the team that made the discovery. "The sudden shift of energies when we add or remove an electron in this experiment provides a direct measurement of the strength of the interaction between the electrons."

Researchers at the Massachusetts Institute of Technology (MIT) have previously found a particularly strange pattern in the twisted graphene structure, and now they’ve studied it more closely and found that the more layers it has, the better it will work.

Graphene is a 2D carbon nanomaterial consisting of a hexagonal hexagonal grid of a hexagonal structure of carbon atoms with a sp2 hybrid orbit. This makes them functionally two-dimensional, because the electrons that move through them can only move forward/backward and sideways, not above and below. This makes graphene very conductive.

Researchers at Aalto University and the University of JyvÃ¤skylÃ¤ showed that graphene can be a superconductor at a much higher temperature than expected, due to a subtle quantum mechanics effect of graphene's electrons.

The discovery of the superconducting state in twisted bilayer graphene spurred an intense debate among physicists regarding the origin of superconductivity in graphene. Although superconductivity was found only at a few degrees above the absolute zero of temperature, uncovering its origin could help understanding high-temperature superconductors and allow us to produce superconductors that operate near room temperature. Such a discovery has been considered one of the "holy grails" of physics, as it would allow operating computers with radically smaller energy consumption than today.

A research team from the University of GÃ¶ttingen, together with the Chemnitz University of Technology and the Physikalisch-Technische Bundesanstalt Braunschweig, has investigated the influence of the crystal on which graphene is grown, on the electrical resistance of the resulting material.

Contrary to previous assumptions, the new results show that the process known as the ‘proximity effect’ varies considerably at a nanometre scale. To determine the electrical resistance of graphene at the smallest scale possible, the physicists used a scanning tunneling microscope (STM).

Researchers from Israel's Weizmann Institute and the UK's Manchester University have succeeded in imaging electrons' hydrodynamic flow pattern for the first time using a novel scanning probe technique. They have proven the longstanding scientific theory that electrons can behave like a viscous liquid as they travel through a conducting material, producing a spatial pattern that resembles water flowing through a pipe.

The results of this study could help developers of future electronic devices, especially those based on 2D materials like graphene in which electron hydrodynamics is important.

An international team of researchers from Spain, the U.S., China and Japan has found that superconductivity in bilayer graphene can be turned on or off with a small voltage change, increasing its usefulness for electronic devices. This follows previous findings regarding twisted bilayer graphene and its ability to exhibit alternating superconducting and insulating regions.

"It's kind of a holy grail of physics to create a material that has superconductivity at room temperature," University of Texas at Austin physicist Allan MacDonald said. "So that's part of the motivation of this work: to understand high-temperature superconductivity better."