A team of researchers at the University of Michigan, led by Zhaohui Zhong, Jeffrey Fessler and Theodore Norris of the Department of Electrical Engineering and Computer Science, has created a 3D camera made from a stack of transparent graphene photodetectors that can capture and focus on objects that are different distances away from the camera lens. The device might find use in applications as diverse as biological imaging, driverless cars and robotics. 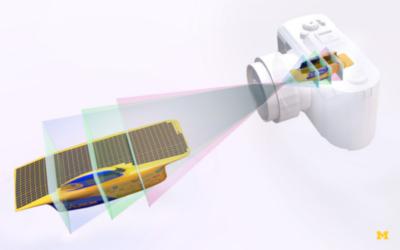 Most of today’s optical imaging systems use a flat optical detector to record the intensity of light reflected from an object at each pixel. However, since these systems detect light in only one plane, all the information concerning the direction of the light rays is lost. This means that the recorded images are simple 2D projections of the actual 3D object being imaged.

The images acquired in that way have a finite field depth – objects at only a particular distance from the camera are in sharp focus, and items in front or behind that distance are out of focus and appear blurred. Also, because of the 2D projection, it is impossible to determine how far away each object is from the camera.

An ideal imaging system would overcome this problem by producing a complete representation of the 3D scene with an infinite depth of field in a single exposure. Such a device could be made of different detector arrays, each stacked along the path of the different incoming light rays. By then detecting multiple focal planes of data all at the same time, algorithms could be used to reconstruct a complete (“light field”) image of the scene in three dimensions, with each object in the scene being in focus. Furthermore, the distance to each object could be determined. Such range detection would be extremely useful for applications like driverless cars and robots.

Now, the University of Michigan team succeeded in building such a photodetecting device. Their new 3D camera uses a stack of transparent sensors made from graphene to simultaneously capture images that are focused on different distances from the camera lens.

The researchers fabricated their photodetector on a transparent glass substrate (rather than the silicon chips usually employed in such devices) using graphene as the light-sensing layer, the conducting channel layer, the gate layer and even the interconnects (which are usually made of metal). Using graphene for all the different functional components of the device in this way allows for sensitive light detection and a transparency of around 95%.

To prove that their design works, the researchers built a single-pixel focal stack light field camera comprising a 100 mm focal length front imaging lens and two single-pixel graphene photodetectors separated by 2 mm. The test object was a point source formed by an illuminated 30-micron-sized pinhole. The point source, the center of the imaging lens and the two photodetectors were all aligned along the same optical (z) axis.

By knowing the lens focal length and the positions of the detectors, the researchers say they can determine the distance of the object from the lens. Likewise, knowing the light intensity profile along the z axis allows them to calculate the 3D depth information of the scene from the data using image processing algorithms.

While their current graphene sensors do not have high enough resolution to depict actual images, the researchers have simulated how larger sensor arrays arranged in their set-up might capture a scene. They say they have also developed the algorithms required to perform such image reconstructions from transparent focal stack data.

As well as applications in autonomous driving and robotics, the new photodetectors might be ideal for biological imaging in cases where it is important to image 3D volumes, the Michigan team reveals. “There are many applications in optical ranging and object identification that may not require the full computational reconstruction of 3D objects and we are currently pursuing this line of work,” they add.