» Will penta-graphene be even more exciting than graphene?

Researchers at the Virginia Commonwealth University and universities in China and Japan suggested a new carbon allotrope called "penta-graphene" (a five-sided variation on the familiar six-sided graphene structure), speculated to have several advantages compared to traditional graphene. 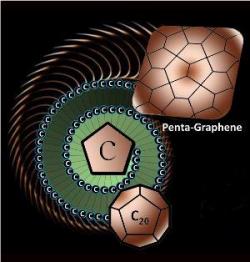 Currently in the computer modelling phase, the material appears to be dynamically, thermally and mechanically stable. The researchers claim that the material might outperform graphene in certain applications, as it would be mechanically stable, possess very high strength, and be capable of withstanding temperatures of up to 1,000 degrees Kelvin.

The scientists have yet to actually synthesize penta-graphene.