In December 2013, Graphene Nanochem, in cooperation with the National Innovation Agency of Malaysia agreed to launch Malaysia's national graphene hub, with hopes that Malaysia will turn into a global graphene innovation hub. Now the Malaysian government has launched the National Graphene Action Plan (NGAP) 2020, a "strategic and calculated venture on graphene". 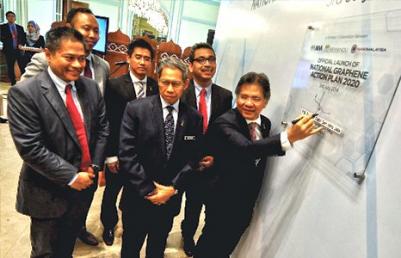 The NGAP 2020 outlined five potential industries that could best benefit from graphene — rubber additives, Li-ion battery anode/ultra-capacitors, conductive inks, nanofluids and plastic additives. The government says that according to their studies, by 2020 Malaysia could capture a $20 million nanofluids market, a $90 million plastic market and a $4.4 billion rubber market.

The plan will be led by NanoMalaysia, a Nanotechnology government agency which was incorporated in 2011. NanoMalaysia roles include the commercialization of nanotechnology R&D and its industrialization. For NGAP 2020, NanoMalysia will implement seven activities which include creating awareness, facilitating projects, access to graphene suppliers, research and development and prototyping, locking in intellectual property, access to expert network, scale up support and coordination and monitoring.

NanoMalalysia's CEO believes that NGAP 2020 will create 9,000 jobs out of which 3,000 will be high-rise jobs. The government did not dedicate any funds to this program as they decided to utilize existing government funds within NanoMalaysia. The government does expect the plan to contribute 9 billion Malaysian Ringgit ($2.8 billion USD) to the country's GDP and $5.6 billion USD to the county's gross national income (GNI).