NASA's SABERS (Solid-state Architecture Batteries for Enhanced Rechargeability and Safety) project, which has been going on for a few years under NASA’s “high risk, high reward” research program, aims to develop batteries with improved power density (preferably ones that could make electric flight feasible, which required around 480 watt-hour per kilogram). 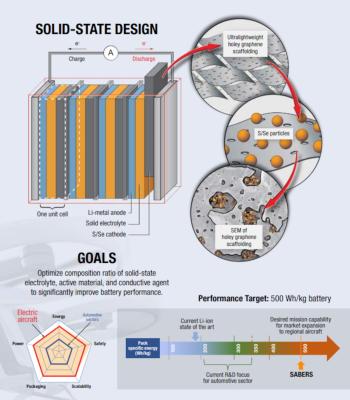 Work taking place at NASA Glenn Research Center in Cleveland, Ohio, by an engineering team lead by Dr. Rocco Viggiano, is aiming to produce batteries that are powerful, light, fast to charge, scalable to any application, and extremely safe. The scientists are doing so by getting rid of the toxic and dangerous materials that make current batteries too inefficient and risky to put in a plane, for example.

Dr. Viggiano explains that the battery is organized into packaged cells that can be stacked together. Each cell consists of three layers: The anode is lithium metal (a solid, unlike lithium ion, which is more like a gel). The cathode is a combination of sulfur and selenium, whose particles are arranged in a graphene mesh invented and patented by NASA. Between the two is the electrolyte, a proprietary solid material free of the flammable components of today’s lithium ion batteries.

NASA's battery is said to be affordable, scalable, and neither flammable nor explosive. Tests reportedly show that it can keep operating even if severely damaged on impact, a critical factor for aviation use but also cars and trucks.

The results of the first battery test were said to be so impressive they surprised Viggiano and his team, as well as others in the industry. They learned that the battery’s operative temperature does not exceed 302 fahrenheit at maximum power consumption. According to Viggiano, they tested them at “different pressures and temperatures, and have found that it can operate at temperatures almost twice as hot as lithium-ion batteries, without as much cooling technology.” The lower operative temperature is vital for the battery safety and its final weight: Since it doesn’t require the refrigeration layers a lithium ion battery needs, the SABERS battery is much more compact, scalable, and lighter.

But the most shocking result was the battery’s power density. SABERS delivers 500 watt-hours per kilogram, which doubles the 260 wh/kg of the best cars (currently), and surpasses the objective of 480 wh/kg needed for regional flight. “It far exceeds the capabilities of lithium-ion batteries that are considered to be the state of the art,” says Viggiano.

While NASA’s solid state battery is a potential game changer, it still has quite a road ahead of it before any practical use is possible. Hiroaki Koda, a former Toyota executive that now directs the Panasonic-Toyota battery joint venture Prime Planet, recently told the Financial Times that practical solid-state batteries won’t start appearing until 2032. Viggiano believes this will happen earlier than that and forecasts that limited-production cars with solid-state batteries may be on the road in the 2025 to 2028 time frame, using shortcuts like adding a few drops of liquid to cheat the physics.