Graphene and CNTs are both made of carbon atoms. A carbon nanotube can be thought of as a sheet of graphene (a hexagonal lattice of carbon) rolled into a cylinder. Accordingly, CNTs can be used as a starting point for making graphene, by “unzipping” them. 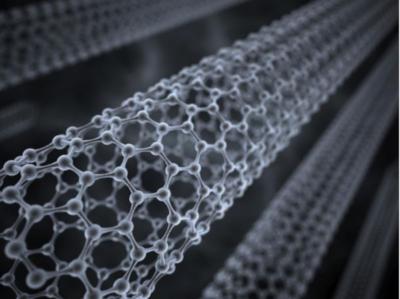 Both graphene and CNTs have exceptional mechanical and electronic properties, which can often be similar. Hence, they are often regarded as rivals for a host of similar applications. It should be noted that there is also an area of research focused on combining graphene and CNTs and using them together for various application like electronics, batteries, sensors and more.

Despite these similarities between the materials, there are still differences between them. While graphene is considered 2D, CNTs are often regarded and 1D. Also, graphene (when ideally structured with atom purity and perfect honeycomb lattice) is a zero-band-gap semiconductor, whereas single-walled CNTs show either metallic or semiconducting properties, with a bandgap that varies from zero to about 2 eV.

Working with CNTs is often considered challenging due to the intrinsic difficulty in positioning them accurately and connecting them. Graphene, which came into the scene later than veteran CNTs, can be easier to interconnect and dope, but carries its own set of challenges, like extraction, manipulation and stability burdens.

Carbon - a building block for many materials

Carbon can be found in many forms, each of which has its own physical characteristics. These forms include well-known materials like diamond and graphite, that only differ in physical properties due to variations in the arrangement of atoms in their structures. Other, less well-known forms are fullerenes - spherical, closed-cage fullerenes are called buckerminsterfullerenes, or “buckyballs,” and cylindrical fullerenes are called nanotubes. Another form, composed only of carbon atoms in a flat, 2D lattice structure is called graphene. Other forms of carbon atoms arrangements exist,like amorphous carbon, Q-carbon and more.

A single, 2 dimensional layer of graphite is called graphene. So, graphene is basically a sheet of carbon atoms arranged in a hexagonal layout. Graphene is considered the first 2D material ever discovered, and is also called a ”wonder material” thanks to an enormous group of properties it holds. For example, graphene is one of the strongest materials in universe, has superior thermal and optical properties, excellent tensile strength, relative transparency, amazing electrical conductivity, and impermeability to most gases and liquids and more.

Graphene’s many attributes make it an attractive material for researchers and developers, which are working hard all over the world to find endless uses for the material. Graphene’s tial is vast, and the applications include: touchscreens (for LCD or OLED displays), computer chips, batteries. energy generation, supercapacitors, medical equipment, water filters, solar cells and more.

What are carbon nanotubes?

Carbon nanotubes (often abbreviated to CNTs) are cylindrically-shaped molecules made of carbon atoms. A sheet of graphene can be rolled-up to make a carbon nanotube. CNTs can be single-walled (SWCNT) if made from one layer of carbon atoms, or multi-walled (MWCNT) when consisting of several layers of graphene sheets. In fact, carbon nanotubes come in various diameters, lengths, and functional group content which can tailor their use for specific applications. 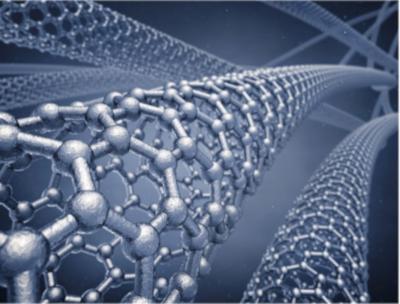 Carbon Nanotubes have been around since the early 1990s and already found some commercial use in the fields of engineering plastics, polymers, displays, anti corrosion paints, thin films and coatings, transparent and non-transparent conductive electrodes, coatings and anti-static packaging and more. In addition, active research is ongoing in fields like batteries, fuel cells, solar cells, water desalination and more.

However, after the initial hype, revolutions failed to happen and many gave up on CNTs. But this is not to say that they do not have actual potential and interest in them is reappearing in the research community in the last few years. As was said, they have found some uses and more are estimated to follow and the potential of CNTs is not considered to have been exhausted.

CNTs are available in bulk quantities up to metric ton quantities. Production capacities for CNTs have been scaled up considerably over the years and currently exceed several thousand tons per year. It is estimated that several CNT manufacturers have over 100 ton per year production capacity for multi walled nanotubes. It seems that the capacity for the production of MWNTs exceeds that of SWNTs, although there is an oversupply in the market. SWNTs are much more expensive and difficult to manufacture than MWCNTs, and there is not yet a distinct large-scale market for SWNTs, which is needed to drive down the production cost.

In terms of prices, SWCNTs are the most expensive type of CNTs, with a price tag of up to $100,000 per Kg - compared to around $100 per Kg for MWCNTs). Some manufacturers sell an intermediate type of CNTs, sometimes called few-wall CNTs. Prices for this type are varies, but can be about $1,000 per Kg. (estimated prices as per 2018).

The VFD was invented by the Flinders Institute for NanoScale Science and Technology’s Professor Colin Raston and enables new approaches to producing a wide range of materials such as graphene and sliced carbon nanotubes. The key intellectual property used by 2D Fluidics comprises two patents around the production of carbon nanomaterials, assigned by Flinders University.

Graphene and CNTs used together to create new stretchable aerogels

Researchers at Zhejiang University in China have designed a new type of aerogels, made of graphene and carbon nanotubes, that can be reversibly stretched to more than three times their original length, displaying elasticity similar to that of a rubber band. This stretchability, in addition to aerogels' existing properties like ultralow density, light weight, high porosity, and high conductivity, may lead to exciting new applications.

The scientists designed carbon aerogels consisting of both graphene and multi-walled carbon nanotubes assembled into four orders of hierarchical structures ranging from the nanometer to centimeter scale. To fabricate the material into aerogels, the researchers created an ink composed of graphene oxide and nanotubes, and then formed the aerogels via inkjet printing. 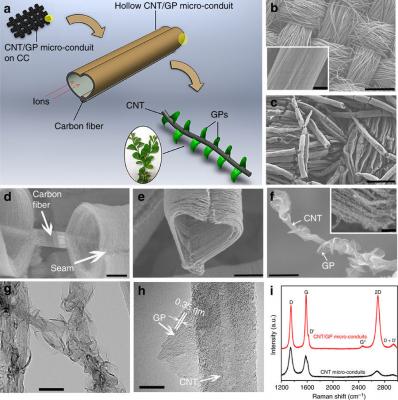 The electrode design reportedly provides the same amount of energy storage, and delivers as much power as similar electrodes, despite being much smaller and lighter. In experiments it produced 30% better capacitance — a device’s ability to store an electric charge — for its mass compared to the best available electrode made from similar carbon materials, and 30 times better capacitance per area. It also produced 10 times more power than other designs and retained 95% of its initial capacitance after more than 10,000 charging cycles.

An inexpensive, flexible pressure sensor can be used as a wearable device for various health monitoring applications

A team led by researchers from the Indian Institute of Technology (IIT) in Bombay, India, has developed a graphene-enhanced inexpensive, flexible pressure sensor that can be used for various health-care applications. The piezoresistive pressure sensor can reportedly monitor even small-scale movements caused by low-pressure variations.

The sensor can measure blood pulse rate in real time when placed on the wrist and neck. The sensor was also tested for its ability to monitor respiration; When placed on the throat, the sensor could detect changes in pressure when different words were pronounced. Interestingly, the fabricated sensor also showed good sensitivity in detecting large-scale motion monitoring, as in the case of bending and extension of finger joints.

In early October 2017 we posted about Nanotech Engineering's novel graphene-enhanced solar panel, a post that raised many eyebrows. Nanotech says that their graphene panel reaches a 92% efficiency (compared to around 20% for large commercial silicon-based PV panels), and the cost per Watt of their panel will be 0.55 cents (compared to a US average of $3.26 for silicon PV panels). 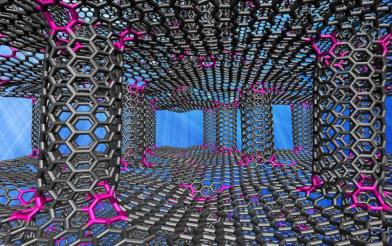 Our post quoted Nanotech's PR, stating that Jeffrey Grossman, Professor of Engineering at MIT verified the technology and said that “Pound for pound, the new solar cells produce up to 1,000 times more power than conventional photovoltaics”.