» Carbonated water can help in extracting graphene from...

Researchers at the University of Illinois at Urbana-Champaign have discovered a new use for soda water - they designed a cleaner and more environmentally friendly method to isolate graphene using carbon dioxide (CO2) in the form of carbonic acid as the electrolyte solution. 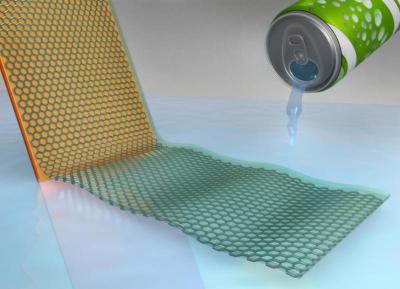 Graphene is often synthesized by using chemical vapor deposition onto a metal substrate, typically copper foil. The issue of separating it from the metal substrate can be extremely tricky. This typically involves either dissolving away the high-purity metal or delaminating it from the substrate - which require the use of harsh chemicals that leave stubborn residue. The ultra-thin graphene also needs to be coated with a polymer support layer such as polycarbonate or PMMA (poly methyl methacrylate), which requires the use of often toxic and carcinogenic solvents.

“In our case, we are using a bio-mass derived polymer, ethyl cellulose, for the coating,” said a lead researcher on the project. “A common and inexpensive polymer often used as a food additive, ethyl cellulose is solvated in just ethanol. This not only makes our graphene transfer process more environmentally friendly, it is now also compatible with a variety of polymeric and soft biological materials such as common plastics and hydrogels that would otherwise not tolerate harsh solvents.”

The team explains that after transferring the graphene, the carbonic acid simply evaporates away as carbon dioxide and water, which doesn’t require any further rinsing. “We’re thus saving both water and time by eliminating the conventional need for the repetitive and tedious rinsing process. In using electrolytes such as NaOH or NaCl, for example, the sodium tends to remain on the graphene, which is very difficult to completely get rid of.”

By delaminating the graphene off from the copper foil using carbonic acid, it is also possible to reuse the growth substrate multiple times, realizing significant material and cost savings.

The team believes this method can have an impact on not just the production of graphene, but also provide a green and affordable technique to use for etching and delamination processing of other materials as well.