Researchers at the Korean Advanced Institute of Science and Technology (KAIST) have developed a graphene-based aqueous hybrid capacitor that is stable, safe and boasts high energy and power densities, in addition to recharging in under 30 seconds. 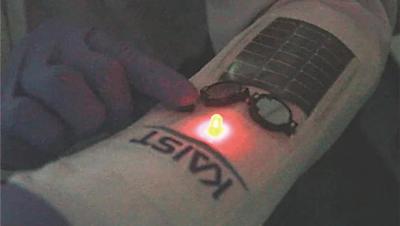 The new capacitor is made with a liquid electrolyte sandwiched between a specially-designed anode and cathode. The anode is made with polymer chain materials based on graphene, which gives it a high surface area, allowing it to store more energy. The cathode material was made up of nickel oxide nanoparticles embedded on graphene.

The new device reportedly had much higher energy density and faster energy exchange than other aqueous batteries. It was far more stable with minimal energy loss, maintaining its capacity at close to 100 percent over 100,000 redox cycles. The device also has a power density about 100 times higher than similar designs, allowing it to be charged in 20 to 30 seconds using low-power systems like a conventional USB charger. In tests, the team connected two of the batteries to a flexible photovoltaic cell, and was able to power an LED, while the whole kit was worn like a sleeve.

"This eco-friendly technology can be easily manufactured and is highly applicable," says co-author of a study describing the device. "In particular, its high capacity and high stability, compared to existing technologies, could contribute to the commercialization of aqueous capacitors. The device can be rapidly charged using a low-power charging system, and thus can be applied to portable electronic devices."