Researchers at Brown University have developed a method of producing ultrathin metal-oxide films with intricate crumple and wrinkle pattern using crumpled graphene sheets as templates. These textured metal-oxide films may be especially beneficial in increasing the efficiency of batteries and photocatalysts. 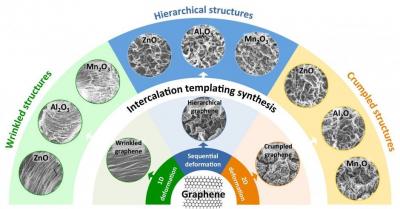 To introduce wrinkle and crumple structures in graphene, the team compressed the sheets multiple times in multiple orientations, in a process that won't work for metal oxides as they are too stiff and crack if compressed too much. The team, however, developed a method of using the crumpled graphene sheets as templates for making crumpled metal-oxide films and transfered those surface features from the graphene onto the metal oxides.The team produced stacks of textured graphene sheets by employing a formerly developed method, then placed the graphene on a polymer substrate, which shrinks when heat is applied. The graphene on top compresses as the substrate shrinks, which results in the creation of crumple or wrinkle structures. The researchers then removed the substrates, obtaining free-standing sheets of crumpled graphene. This compression process can be performed multiple times, making more intricate structures, which can also be controlled - when shrink films are gathered on opposite sides and allowed to shrink in only one direction, periodic wrinkles can be formed.

The textured graphene sheets were deposited in a water-based solution that contained positively charged metal ions, to transfer the structures onto metal oxides. These ions were pulled into the space between the sheets by the negatively charged graphene. The particles bonded in the space between the layers, resulting in the creation of metal sheets that contained the wrinkle structures of the graphene. Oxidation was then used to remove the graphene, leaving behind the wrinkled metal-oxide sheets. The method was shown to work with a wide range of metal oxides including aluminum, copper, zinc, and manganese oxides.

After creating the textured metal-oxides, the researchers tested them to see if the materials’ properties were enhanced by the textured surfaces. The tests showed that the charge carrying capacity of wrinkled manganese oxide, when used as a battery electrode, was four times higher than that of a planar sheet. The team believes that this may be because the wrinkle ridges act as a defined path that the electrons can follow, allowing the material to carry more electrons at a time.

The ability of crumpled zinc oxide to perform a photocatalytic reaction – reducing a dye that is dissolved in water under UV light – was also tested by the researchers. The results showed that when compared to a planar film, a crumpled zinc oxide film was four times more reactive. The team explained that this was due to the higher surface area of crumpled films, which provide the material with more reactive sites.