An interview with the CEO of graphene developer planarTECH

UK-based planarTECH has recently concluded a successful equity crowdfunding campaign, as part of Graphene-Info's Graphene Crowdfunding Arena. The company's CEO, J. Patrick Frantz, was kind enough to answer a few questions we had and give his advice for graphene companies that consider the equity crowdfunding option. 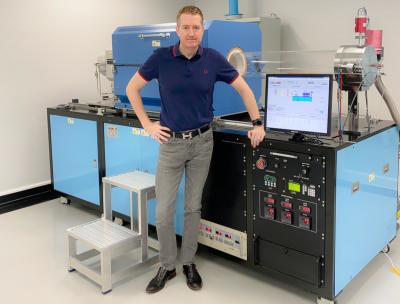 Thank you for this interview. You have recently concluded a successful graphene crowdfunding campaign. Well done. Can you summarize this experience for us?

Well, given the current situation with COVID-19, it was certainly an emotional rollercoaster ride to get through the crowdfunding. If I recall correctly, we launched the campaign in âprivateâ live mode in January as the pandemic started to unfold. We stayed in private mode for a while but finally went âpublic" in March as the crisis was reaching its most severe point in Europe.

Initially, we thought our campaign would fail but what we ended up seeing was that people were still willing to invest. Seedrs was still very accommodating to us and the other companies raising. We extended the campaign a few times and eventually we exceeded our goal. Overall, what was already a stressful experience turned into an even more stressful one due to the pandemic.

Can you give some advice to graphene companies that are considering crowdfunding campaigns? Some do's and don'ts?

I learned two main things from this experience. First, itâs inherently a social activity and I think the companies that are successful have very large social media followings. This is something that we didnât have at first, so when we launched the campaign I felt we were unable to leverage that into investments.

Second, even though this is crowdfunding, it definitely helps to have as many âcornerstoneâ investors as possible going into the campaign. The closer you are to your target, the more likely you are to reach and exceed your goal. I remember that we brought in two cornerstone investors while the campaign was open that brought us up to 85-90% of our goal and thatâs when we really started to see some momentum with the smaller investors.

We hear your graphene masks are being successfully introduced to the market, can you give us an update on that?

Yes, the response to and demand for the product has been amazing. Weâre fielding now over 50 active and serious inquiries and weâve take orders and commitments for over 200,000 masks so far. Weâre seeing especially strong interest in B2B deals, for example companies who want to have all their employees wearing the mask as part of their uniform and universities who want to give them to students when the next term starts.

What are the next steps for planarTECH?

Well, we released a new product that (so far) has been a success, and weâre extremely focused on that right now. Product revenue was always something we had on our roadmap, but not for another 2-3 years. So weâre taking a serious strategic look at the business to see what kind of company we want to become. That said, weâre not giving up on any of the things we said we would do in the Seedrs campaign.

Your main business is CVD graphene production equipment. How do you see the CVD market in the next few years?

On the academic side, we see a trend away from graphene into newer 2D materials, like MoS2 and h-BN. So we are following that trend, which gives us additional insight into the pipeline of applications. For graphene, we still do see demand for CVD graphene and production systems for graphene.

For us, it has definitely had an impact. On the system side, our factory in Korea was mostly unaffected by the pandemic and remained operational. We just shipped one system to Poland and have another one going next week to India. After that we have at least two more shipments planned in the coming months. However, weâre currently unable to travel to do installations, so this has been a negative. Fortunately, the customers have been very understanding. So far, we havenât had any cancelations of CVD projects - weâve still be fielding inquiries - but we do expect to see some delays. On the positive side, we were lucky to be able to release a product relevant to the pandemic. It was really a case of being in the right place at the right time.

For the industry as a whole, I think there will be some slowdowns. My general advice would be for companies to focus on developing products that are used everyday.

If your company is also looking to raise funds, check out our Graphene Crowdfunding Arena!