» New method of layering metals with the graphene may...

Scientists at the U.S. Department of Energy’s Ames Laboratory have demonstrated a new process to sheathe metal under graphene, which may lead to new and better-controlled properties. 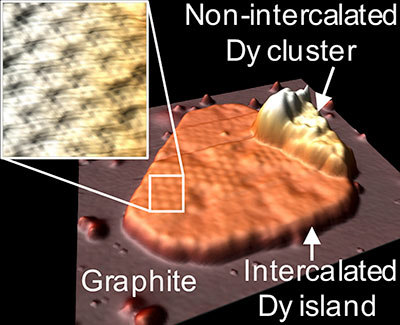 The researchers encapsulated dysprosium, a magnetic rare-earth metal, by bombarding the top layer of bulk graphite with ions to create defects on its surface, followed by high-temperature deposition of the metal. It resulted in “mesas” or islands of dysprosium underneath a single layer of graphene. The formations are said to be significantly different than anything the Laboratory’s 2D materials experts have ever seen.

“It’s well-known that certain metals can be embedded between bulk graphite layers,” said a researcher on the team. “But these mesas form at the top graphite surface only, and they are pure metal composed of multilayers, which is a first. The combined properties of the metal plus graphene may be very different than other, previously produced materials. That’s something we’re exploring now”. The researchers were also able to achieve the same mesa-like formations with two transition metals, ruthenium and copper.

“That suggests we have a very adaptable recipe for producing this kind of surface material, which makes its discovery very exciting in terms of potential applications,” said an Ames Laboratory scientist and Distinguished Professor of Chemistry and Materials Science and Engineering at Iowa State University. “If we can control the process so that we can deliberately pattern the formation of these little metal slabs, perhaps we can harness and control their magnetic and electronic properties.”