Researchers at the U.S. Department of Energy’s (DOE) Argonne National Laboratory have been working replace oil with solid lubricants such as graphene. Argonne’s Laboratory Directed Research and Development (LDRD) Program supplied the seed money needed to begin experimentation towards that end. This work may have far reaching implications both inside and outside the automobile industry. It could help wind turbines move with greater ease, allowing them to produce more energy. It also can better seal off machinery as it pumps oil or gas from the ground or out at sea. 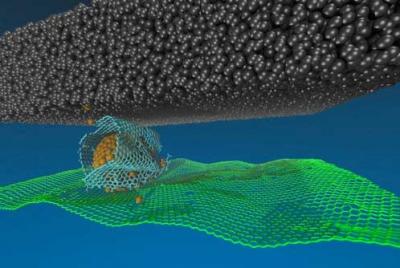 Graphene can also be used to better protect ball bearings, which can corrode over time when exposed to water, a process commonly referred to as tribo-corrosion. The Argonne-developed process based on graphene has shown that a few layers of graphene not only reduced friction in steel rubbing against steel by seven times and the wear by 10,000 times but also significantly reduced the tribo-corrosion problem.

“That’s a significant improvement over any other existing solid lubricants coating available today,” the researchers said. “Also, the amount of graphene needed is very small and therefore cost is much lower and eliminating oil waste would be more environmental friendly, which is a great side benefit.”

The Argonne team went on to win two additional grants totaling $1.4 million from the U.S. Department of Energy, but it was through the initial LDRD funding that they recognized graphene as an emerging solid lubricant, one that works differently than existing oil-based and other solid lubricants, including graphite lube and even diamond-like carbon.

Not only does graphene perform better, it’s more affordable. Even moderate quality graphene works great for tribological applications, which is not the case for various electronics and sensor applications.

Most of the cost in conventional solid lubricant coatings relates to the infrastructure needed to apply it, including the electricity to run the related machinery and the machines’ maintenance. Not so with graphene, which can be applied by spraying a solution in the air and can coat any complicated shape or size — and over a large surface area.

In an effort to bring their finding to the marketplace, the research team is currently working with two different companies in vastly different industries.

The first is one of the world's leading providers of mechanical pump seals. It is working with the scientists to replace its silicon carbide seals with graphene, which would reduce wear and friction.

The team also plans to work with another company from the automobile sector, which uses molds to create car parts, including door panels. Argonne researchers are seeking to develop a new lubricant that could reduce friction in metal forming applications and thereby bring down the cost of automobile manufacturing.