» Researchers gain insights into the wettability of... 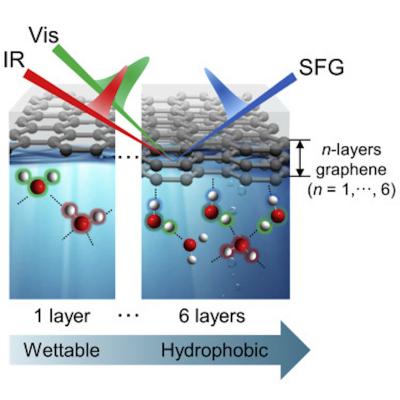 In their new work, the team succeeded at observing the hydrogen-bond structure of water molecules at graphene-water interfaces using a technique called 'vibrational sum-frequency generation spectroscopy (VSFG)'. VSFG is a second-order nonlinear spectroscopy that can be used to selectively analyze molecules with broken centrosymmetry. It is an ideal method for studying the behavior and structures of water molecules at the graphene interface since the water molecules in the bulk liquid are not visible due to their isotropic distribution of molecular orientations.

The research team observed the VSFG spectra of water molecules on a multi-layer graphene covering a calcium fluoride (CaF2) substrate. They were able to track changes in the hydrogen bond structure of water molecules. When there were four or more layers of graphene, a characteristic peak at ~3,600 cm-1 started to appear in the VFSG spectra. This peak corresponds to the water molecules with the dangling -OH groups that do not form hydrogen bonds with neighboring water molecules, which is a characteristic feature that has been commonly found for water at the hydrophobic interface. This result is the first observation showing the molecular-level structure of water at the water-graphene interface.

In addition, the researchers compared the VSFG wettability value that they could calculate from the measured spectra to the estimated adhesion energy that is related to the measured WCAs (water contact angles). They found that both properties are highly correlated with each other. This observation suggests that the VSFG could be an incisive tool for studying the wettability of two-dimensional materials at the molecular level. It also showed the possibility of using VSFG as an alternative to measuring the adhesion energy of water on buried surfaces, where measuring the water contact angle is difficult or even impossible.

The first and second authors KIM Donghwan and KIM Eunchan Kim note: "This study is the first case describing the increasing hydrophobicity of the graphene surface at a molecular level depending on the number of graphene layers," and "Vibrational sum-frequency generation spectroscopy could be used as a versatile tool for understanding the properties of any functional two-dimensional materials."

Prof. CHO Minhaeng, the Director of CMSD, notes: "For applications where graphene is utilized in water solution, the hydrophobicity of the interface is one of the key factors in determining the efficiency of graphene layers for various application. This research is expected to provide basic scientific knowledge for an optimal design of graphene-based devices in the future."