Following years of intensive R&D, SP Nano is now offering its dispersions to application developers. This is the first time that carbon nanomaterials can “truly” be dispersed and achieve cutting-edge performance across a wide range of applications.

SP Nano’s dispersions are now being applied to a wide range of applications, such as

About the SP1 protein

SP1 is a boiling stable protein, originally isolated from the Aspen tree. It is also resistant to detergents, organic solvents, and proteases, rendering it suitable for many industries and low cost to produce by industrial fermentation. SP Nano has genetically engineered the exceptionally stable SP1 protein and is commercializing it for specific tailored carbon nanoparticles solutions. The engineered SP1 presents 12 times on its surface a peptide specific for graphitic surfaces and therefore binds very tightly to graphene, CNT and other CNPs resulting in extremely stable water dispersions of high concentrations.

See image below for the SP1 crystal structure. The image shows the ring-like structure, where the yellow ribbons represent the graphitic binding peptide. The peptide enables the protein to dock with high avidity on carbon nanoparticles. The tight binding is derived by simultaneous binding by 6 peptides, while each peptide contains several binding sites. Once bound to the carbon nanoparticle, the protein will never release its binding. 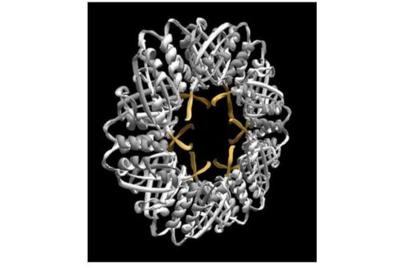 The rest of the protein’s surface can be involved in many other desired interactions with polymers and small molecules of choice to adapt the SP1/CNP complex to different chemical environments.

From agglomerates to dispersions

The SP1 technology provides excellent dispersions of CNT and graphene without chemically modifying their surfaces (such modifications disrupt the molecular structure of CNPs and compromise their properties) or using surfactants (whose affinity to the CNPs is moderate and are thereforenecessary in large amounts,which interfere with downstream applications).

The main advantages of SP1-based dispersions:

Comparison of SP1 with current state of the art dispersion methods

* The dispersion quality combines 3 parameters: separation level, stability, and sensitivity
** The grade for “Minimal damage to properties due to disruption of molecular structure” has a double weight in the weighted average calculation

One example of SP1’s advantages is in composite materials. SP1 enables two approaches for composites nano-reinforcement: Dispersion in resin, or fibers coating. SP1/CNP complex binds to fibers of textiles (including carbon, glass, aramid and more). The material can be dispersed in resins, adhesives, paints, binders and more. SP1/CNT improves inter-laminar mechanical properties:

SP1 binds covalently to matrices such as epoxy, phenolic etc. SP1 comprises a variety of functional groups that facilitate a diverse chemistry with different resins. In epoxy or phenolic resins, the multitude of amine groups of SP1 create covalent bonds with the matrix, which together with the tight binding of the CNP itself, guaranteeing that the CNP will be torn and not pulled out, thereby serving as a true nano-reinforcement.

As can be seen in the image below, it is evident that the CNTs are homogeneously dispersed, and that all the CNTs are torn at the fracture surface, indicating that they were participating in the effort to prevent the crack propagation. While epoxy fracture surfaces are usually smooth, the rough surface in the image indicates that the crack propagation in the treated material was interrupted by the CNTs. 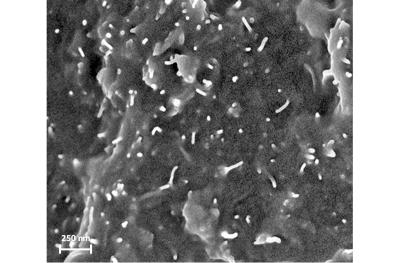 Another example of SP1’s technology advantages is with surface coating. SP1/CNP can be used to coat almost any surface of choice, including textiles using standard textile dyeing machines. Since carbon fibers have the same molecular configuration as graphene and CNT, these fibers are usually coated in one step: while the first set of 6 binding peptides of SP1 is bound to CNT or graphene, the second set of peptides on the other side of the ring-shaped protein tightly binds the carbon fibers. 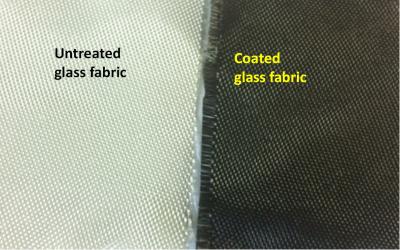 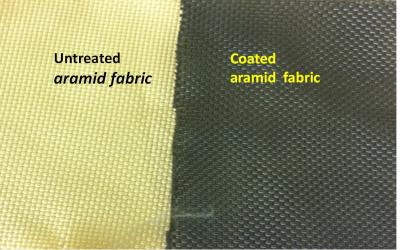 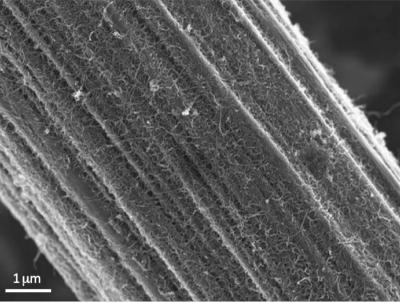 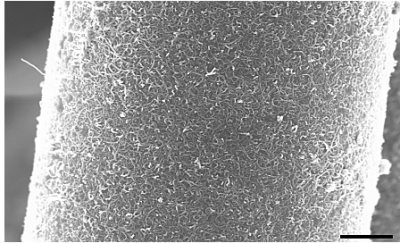 SP Nano technology serves also as an excellent adhesion promoter on steel wires (product developed together with one of the world largest steel wire manufacturers).

Pull out (ASTM D2229) of steel wire from rubber following their co-vulcanization is easy and no rubber is left bound to the wire. Traditionally, such alloys as brass must be used as coating for steel to promote adhesion to rubber during vulcanization. Coating of wires with SP1/CB/latex demonstrated equivalent excellent adhesion as can be seen below from the rubber coverage on the steel. 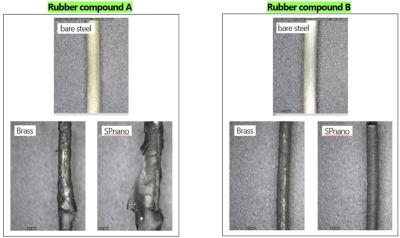