A team of researchers from Columbia University, University of Virginia, University of Rhode Island, Amherst College, Barnard College and Harvard University have discovered a new type of carbon material: graphullerene.

The material is a new 2D form of carbon made up of layers of linked fullerenes peeled into ultrathin thin flakes from a larger graphullerite crystal—similarly to the way graphene is peeled from crystals of graphite.

Researchers from Brown University, the University of New South Wales, Columbia University, University of Innsbruck, and the National Institute for Materials Science in Japan have carried out new experiments involving trilayer graphene, in which an external magnetic field is not required in order to achieve the 'superconducting diode effect' - a material that behaves like a superconductor in one direction of current flow and like a resistor in the other.

In contrast to a conventional diode, such a superconducting diode exhibits a completely vanishing resistance and thus no losses in the forward direction. This could form the basis for future lossless quantum electronics. Physicists have already succeeded in creating the diode effect, but with some fundamental limitations. "At that time, the effect was very weak and it was generated by an external magnetic field, which is very disadvantageous in potential technological applications," explains Mathias Scheurer from the Institute of Theoretical Physics at the University of Innsbruck. The new experiments confirmed a thesis previously theorized by Scheurer: Namely, that superconductivity and magnetism coexist in a system consisting of three graphene layers twisted against each other. The system thus virtually generates its own internal magnetic field, creating a diode effect.

An international research team that included scientists from the University of Göttingen, Ludwig-Maximilians-Universität München, National Institute for Materials Science in Tsukuba, Japan, and University of Texas at Dallas, has detected and interpreted novel quantum effects in high-precision studies of natural double-layer graphene.

This research provides new insights into the interaction of the charge carriers and the different phases, and contributes to the understanding of the processes involved.

Versarien has announced the launch of a new hybrid nanomaterial that has superparamagnetic properties, which can be used across a range of applications, like defense and healthcare. The new material combines graphene with both iron oxide and manganese oxide nanoparticles and its development was led by Versarien's 62% owned subsidiary, Gnanomat.

The superparamagnetic material combines graphene with both iron oxide and manganese oxide nanoparticles that provide the material with magnetic properties. In return, graphene provides electrical conductivity to these electrically insulating metal oxides. Magnetic nanocomposites can readily respond to external magnetic fields which allow them to be manipulated. Potential applications of the material include the treatment of wastewater whereby pollutants are adsorbed onto the graphene surface. The material could also lends be used in biomedical and biotechnology applications, or defense applications requiring the shielding of electromagnetic fields. Magnetic manipulation could allow the recovery and recycling of the graphene, something that could not be done with normal graphene compounds.

A Memorandum of Understanding (MoU) has been signed for the establishment of a graphene research and innovation center in India.

Digital University Kerala, the country's first on-campus digital university, Centre for Materials for Electronics Technologies (C-MET) and Tata Steel are the implementation partners of the center.

Researchers at the University of Colorado Boulder and Qingdao University of Science and Technology have managed to synthesize an illusive form of carbon called graphyne. Graphyne has long been of interest to scientists because of its similarities to graphene. However, despite decades of work and theorizing, only a few fragments have ever been created before now. 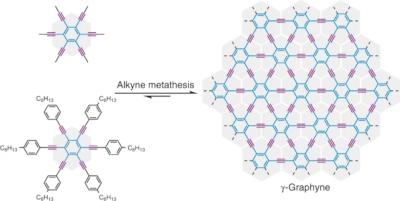 "The whole audience, the whole field, is really excited that this long-standing problem, or this imaginary material, is finally getting realized," said Yiming Hu, lead author on the paper. 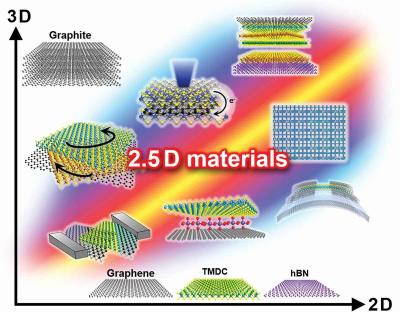 A research team led by the University of Michigan has developed a reliable, scalable method for growing single layers of hexagonal boron nitride on graphene.

Graphene-hBN structures can power LEDs that generate deep-UV light, which is impossible in today's LEDs, said Zetian Mi, U-M professor of electrical engineering and computer science and a corresponding author of the study. Deep-UV LEDs could drive smaller size and greater efficiency in a variety of devices including lasers and air purifiers.

In their new study, the researchers revealed direct evidence of electron correlations in a two-dimensional material called ABC trilayer graphene. This material has previously been shown to switch from a metal to an insulator to a superconductor.

Researchers from MIT created a new 2D material, called 2DPA-1, which is the world's first 2D polymer. Until now, it was actually believed to be impossible to induce polymers into a 2D sheet.

To create the material, the researchers used a novel polymerization process, that was used to generate a two-dimensional sheet called a polyaramide. For the monomer building blocks of the material, they use a compound called melamine, which contains a ring of carbon and nitrogen atoms. Under the right conditions, these monomers can grow in two dimensions, forming disks. These disks stack on top of each other, held together by hydrogen bonds between the layers, which make the structure very stable and strong.