Researchers at the University of California, Berkeley, used graphene to build lightweight wireless ultrasonic loudspeakers and microphones. These devices complement standard radio transmission using electromagnetic waves in areas where radio is impractical, such as underwater, but with far greater fidelity than current ultrasound or sonar devices. They can also be used to communicate through objects, such as steel, that electromagnetic waves can’t penetrate. 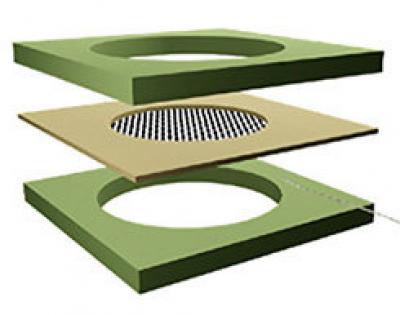 Speakers and microphones both use diaphragms, typically made of paper or plastic, that vibrate to produce or detect sound. The diaphragms in the new devices are graphene sheets that have the right combination of stiffness, strength and light weight to respond to frequencies ranging from subsonic (below 20 hertz) to ultrasonic (above 20 kilohertz). Graphene is thin enough to respond immediately to pulses, and is very light so it is able to generate sharp pulses and measure distance much more accurately than traditional methods. The human hearing range is from 20 hertz up to 20,000 hertz, whereas bats hear only in the kilohertz range, from 9 to 200 kilohertz. The grapheme loudspeakers and microphones operate from well below 20 hertz to over 500 kilohertz.

The scientists say that these devices could be one of the applications closest to commercial viability, since they have worked out how to make the graphene and mount it, and it’s relatively easy to scale up. The researchers state that the graphene loudspeakers will please audiophiles as they provide excellent sound quality and flat response. They even predict that these new microphones could be incredibly valuable for studying auditory signals at high frequencies, such as the ones used by bats. The use of graphene allows the scientists to obtain very flat frequency responses in a wide range of frequencies, including ultrasound, and will permit a detailed study of the auditory pulses that are used by bats.

In 2013, Berkeley scientists developed a graphene-based earphone-sized speaker that could outperform the best earphones. In 2011, Korean researchers developed a transparent and lightweight speaker made from graphene that may be especially suited for developing noise-cancelling devices.