Researchers at Northwestern University in the U.S have designed a way to use "crumpled graphene balls" to improve Li-ion batteries. The team explained that in current batteries, lithium is usually atomically distributed in another material like graphite or silicon in the anode. However, using an additional material 'dilutes' the battery's performance. 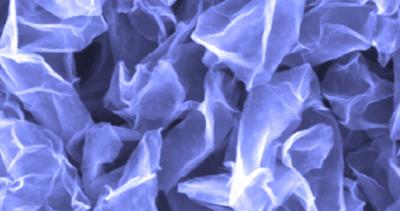 Since Lithium is a metal, it sounds logical to use lithium by itself, but researchers have spent years trying to do so without sufficient success. The biggest challenge has been that when lithium charges and discharges, it can generate dendrites and filaments, with implications for safety and reliability. The team said: "At best, it leads to rapid degradation of the battery's performance. At worst, it causes the battery to short or even catch fire."

One solution involves bypassing the battery's destructive dendrites by implementing a "porous scaffold", although this causes different problems. "As lithium deposits onto and then dissolves from the porous support as the battery cycles, its volume fluctuates significantly. This volume fluctuation induces stress that could break the porous support," explained the researchers.

The scientists have come up with a solution "that makes batteries even lighter in weight and able to hold more lithium". They've applied a scaffold made from crumpled graphene balls. This method can reportedly stack with ease to form a porous scaffold, due to their paper ball-like shape. It can prevent dendrite growth but can also survive the stress from the fluctuating volume of lithium.

"One general philosophy for making something that can maintain high stress is to make it so strong that it's unbreakable," added the researchers. "Our strategy is based on an opposite idea. Instead of trying to make it unbreakable, our scaffold is made of loosely stacked particles that can readily restack."

In the team’s battery, the crumpled graphene scaffold houses the fluctuation of lithium as it cycles between the cathode and anode. The crumpled balls can travel apart when lithium deposits and then freely assemble back together when the lithium is depleted. Since the balls are conductive and allow lithium ions to flow quickly along their surface, the scaffold forms a continuously conductive, porous, dynamic network for lithium.

In contrast to batteries that use graphite as the host material in the anode, this solution is a lot lighter in weight and can stabilize a higher load of lithium during cycling. While typical batteries encapsulate lithium that measures only tens of microns in thickness, this battery holds lithium stacked 150 µm high. The team has filed a provisional patent via Northwestern’s Innovation and New Ventures Office (INVO).

Northwestern researchers have been working on utilizing crumpled graphene balls for years now. Back in 2011, they discovered that crumpling graphene sheets into balls exhibits strain-hardening behaviors - which means that that these balls are remarkably resistant to aggregation in both solution and dried states. In 2016 they targeted the problem of fuel waste in automobiles due to friction, and tested crumpled graphene balls as a lubricant additive.