Researchers at The University of Alabama used graphene to fabricate a lighter car hood, as part of an attempt to reduce the weight of a Chevrolet Camaro. The new hood is made of a mixture of graphene and carbon fiber, as opposed to the original hood which is made of aluminum. 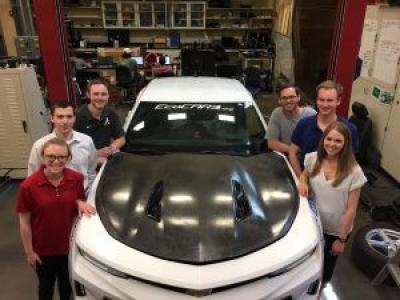 The hood is half the weight of the original hood, a crucial adjustment as a larger team of students work to turn the Camaro into a plug-in hybrid as part of a national contest called EcoCAR 3.

After months of computer modeling and material tests, the team settled on a carbon fiber hood with less than one percent of graphene. They made resin of the material that they vacuum infused into a mold of the hood, later drilling and finishing the hood to fit onto the Camaro. The new hood weighs 11.1 pounds, less than the 22.1 pounds of the original hood, meeting the goal to cut the weight of the hood in half.

Using a testing apparatus they constructed, the students mimicked a 30-mph head-on collision with weights. The hood buckled under the force without splitting, and, in fact, returned to its original form after crash, demonstrating flexibility.