Researchers at Chalmers University of Technology in Sweden demonstrated how graphene films can be used for the efficient cooling of electronic devices. Disposing of excess heat in efficient ways is imperative to prolonging electronic lifespan, and would also lead to a considerable reduction in energy usage. 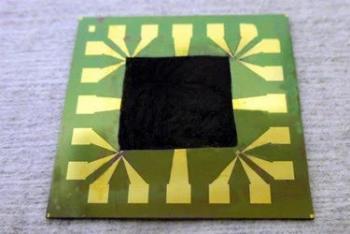 In 2013, Chalmers researchers had observed the impact of graphene in having a cooling effect on silicon-based technology. This earlier technique, however, was filled with problems since it consisted of only of a few layers of thermal conductive atoms and could not be used to rid electronic devices of great amounts of heat. Researchers tried to resolve this issue by stacking additional layers of graphene to augment its effect, but it ended up revealing yet another issue - as extra layers are added, it significantly lessens the ability of graphene to remain adhered to the electronic device.

The scientists were able to resolve this problem by adding (3-Aminopropyl) triethioxysilane (APTES) molecules to functionalize the graphene and create stronger bonds. The graphene film effectively functions as a coolant, preventing devices to heat up to the point where they start to malfunction. The technique helps the system reach a capacity of four times the capacity that could be scaled via copper.

The scientists state that increased thermal capacity could lead to several new applications for graphene, like the integration of graphene-based film into microelectronic devices and systems, such as highly efficient Light Emitting Diode, lasers and radio frequency components for cooling purposes.