This is a guest-post by Jeffrey Draa, CEO at Grolltex - producing graphene biosensors on silicon chips today shows low yields, high cost and restrictive packaging options, limiting scalability and market penetration. But optimization may be here.

Monolayer, electronics grade graphene is propelling advanced biosensing in many key areas. Google the search term, ‘graphene biosensor’, and one will see thousands of next-generation, life enhancing applications being refined in research labs worldwide. This one atom thick material is creating biosensing and detection performance in speed and sensitivity not possible before. Areas such as cancer and virus detection, new drug discovery, genomics, allergens, glucose and many more are starting to see unimagined advances. By far, the number 1 use case for monolayer graphene films today is atomic level biosensing. 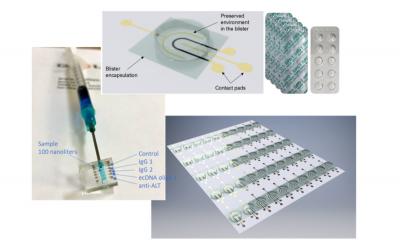 And it’s easy to see why: Combine the material’s single atom thick dimensions, unparalleled electrical conductivity, biocompatibility, strength and transparency and one would be hard pressed to find a more suitable material on the periodic table in its ability to provide biological feedback. Sources of monolayer graphene are also growing such that this material can now be purchased over the internet inexpensively, via website shopping carts. Because of this, we are now seeing commercialization and scaling in many critical life science and diagnostics areas.

This material is coming of age as there are now many very competent commercial designers of graphene-based biosensor devices. From websites and other publicly available information, one finds: Cardea Bio, “connecting biology and electronics” in areas such as genomics and the ‘Crispr-chip’; Hexagon Fab, for “protein and small molecule detection” for drug discovery; Hememics, for point of care virus diagnostics; GRIP Molecular, for at home virus detection; Nanomed, for ‘small molecule research’; GraphWear, for glucose detection in sweat, and; Graphene Dx, who is “transforming consumer diagnostics” in areas such as drug abuse substance testing, allergens and many others.

One thing nearly all of these ground-breaking graphene biosensor companies have in common - they make their devices on silicon chips, in the silicon manufacturing environment. This is understandable as the silicon fabrication facility (or ‘fab’) is where one can find the basic tools to make a device at nanoscale; patterning, deposition, and etch are all available and well understood in a silicon wafer fab.

However, this is a very expensive place to create a device. A typical fabrication cost for one of these companies is $15 - $20 for each chip. Add on top of that the specialized and restrictive package that a piece of silicon must be mounted in, and the combined expense of a biosensor chip and the pricey package it resides in today can be in the range of $25 - $40 or more.
A related question: Do the features and geometries of the devices demand they be made on silicon?

Today, the answer is no. From publicly available information and patent filings, one can see that most of these devices have rather large geometries, compared to most computer chips, so they are relatively easy to make. Graphene biosensors do not have features so small that making them in a silicon fab is required. Additionally, another look at publicly available information shows most of the devices in question don’t use the silicon as any part of the functioning of the device. The graphene sensor just sits atop the silicon wafer, basically using the silicon as a processing tray.

So, one wonders, must these devices be made on silicon?

Another problem with making graphene-based biosensors on silicon chips: Anyone who has processed monolayer graphene on silicon wafers knows it is very challenging; graphene simply just doesn’t like to be on silicon. Combine surface energy issues, hydrophobicity, mechanical strains from the transfer activity, and other challenges and the outlook today for combining graphene and silicon is low yields and expensive challenges. Companies such as U.S. based Grolltex (‘graphene-rolling-technologies’) and others have been doing this for many years and can testify to the difficulties associated with combining graphene and silicon. Spoiler alert: There’s a reason no commercial silicon wafer fab today offers graphene processing in house.

So given all this, one might believe it could be decades before the field of advanced graphene diagnostics on silicon can work out all these problems of practicality, cost and packaging and really optimize and benefit from graphene-based biodevices in any meaningful way. Well, it doesn’t have to be so. It turns out, these devices can be made on plastic instead.

For those of us who are not experts, the field of plastics has come a very long way in producing a wide variety of materials choices with characteristics such as strength, flexibility, thermal toughness, recyclability, and ease of biodegradation. Add to this the flexibility, cost benefits (in some cases approaching 100x) ease of manufacturing - such as on a roll-to-roll schema – and a decades old knowledge base and the attraction of manufacturing these devices on plastic instead becomes immediately apparent. By the way, this evolution is nothing new. It is not uncommon for well-established designs of silicon-based devices to transition to ‘on plastic’ instead as they evolve and wherever this can be done, it is. The world of flexible PCB boards is also revolutionizing many applications.

Some graphene producers, such as Grolltex, have begun converting silicon-based graphene biosensors to ‘on plastic’ designs. Key applications such as glucose, protein binding interactions (for drug discovery and other applications) and molecular (detecting the DNA of a virus, for example) have already been proven to work on plastic and there’s no apparent reason that many others can’t follow. As important as cost savings over silicon, on plastic manufacturing allows packaging and form factor flexibility such that many new applications can be accessed that weren’t possible before (see images for early designs).

One real life example illustrates this well: A tree farmer wanted to use an advanced graphene biosensor to test the health of his trees in the field, looking for the fungus that causes ‘leaf curl’ in some fruit and nut trees. The graphene sensor available at the time was a single use, silicon chip mounted in a thumb drive type package. Not only did this graphene biosensor device cost $50 per measurement (use once, throw it away), but the farmer would have had to carry a host device such as a laptop in the field to insert the thumb drive into for each reading.

Instead, for this application, a plastic ‘bubble pack’ form factor (similar to an aspirin or other pill pack) graphene-based biosensor was discussed. Here, the farmer could tear off a single bubble pack sensor (first image above), at a cost of about 37 cents, to get the data with a handheld reader. And if the farmer accidentally dropped one in the field, the used bubble pack would biodegrade.

With these kinds of sensors made on plastic, via a roll-to-roll schema, the types of user-friendly form factor designs available are near limitless.

Advanced biosensing on monolayer graphene is here and is opening revolutionary opportunities in areas for human health, like the Crispr-chip and cancer research, that are just now becoming clear. The published literature easily available in so many important areas of diagnostics is compelling and near overwhelming in the possibilities. Early graphene biosensor companies are quickly advancing in the areas previously discussed and even large Wall Street hedge funds and private equity groups are starting to invest. The hurdles to adoption have many similarities to other breakthrough technologies we have all witnessed: Cost, ease of use, flexibility and sustainability. With a conversion of graphene biosensing from silicon chips to plastic, this key field of human advancement now has a much more open runway.