In a new UK-funded research, scientists from Paragraf and Queen Mary University of London have successfully fabricated an Organic Light-Emitting Diode (OLED) with a monolayer graphene anode instead of the problematic ITO. 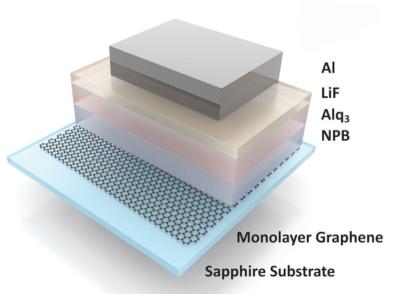 Professor Colin Humphreys of Queen Mary and Paragraf, says: “Because of its importance and scarcity there have been many attempts to replace ITO, but no material has been found to have a comparable performance in an electronic or optical device until now. Our paper is the first paper in the world to demonstrate that graphene can replace ITO in an electronic/optical device. We have shown that a graphene-OLED has identical performance to an ITO-OLED. ITO-OLEDs are widely used as the touch screens on our mobile phones.”

The graphene was patterned using photolithography and its conductivity was enhanced by doping with nitric acid prior to deposition of the OLED stack. The electrical and optical performances of the as-fabricated graphene-based OLEDs were identical to the control devices with conventional ITO anodes.

All the processes used in the fabrication of graphene-based OLEDs can be performed at wafer scale. This paper demonstrates the potential for graphene to replace ITO as anodes in OLED devices in a technologically and commercially effective manner.