A team of scientists at Washington University has developed a technique for using sheets of graphene oxide to obtain drinkable water using sunlight; The technique involves heating dirty water to a boil - creating purified steam that can be collected and safely consumed. 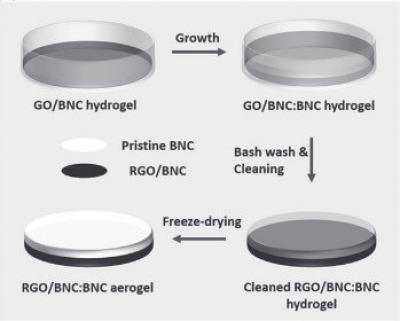 The team has devised a method of heat localization using bilayered biofoam composed of bacterial nanocellulose (BNC) and reduced graphene oxide (RGO). The bilayer structure was created by growing Gluconacetobacter hansenii bacteria in the presence of graphene oxide flakes. The technique relies on the fact that when you boil water, you kill any microbes that can cause intestinal problems in humans. So, by collecting the steam and allowing it to condense, you get water that’s safe to drink. But the problem with most solar-steam techniques is that they’re inefficient, as a lot of energy is wasted by heating the entire volume of water at once. The solution to this problem is to confine heat energy to the boundary between air and water, so that you only heat the relevant evaporation surface.

The team explains that the process is extremely simple; "The beauty is that the nanoscale cellulose fiber network produced by bacteria has an excellent ability to move the water from the bulk to the evaporative surface while minimizing the heat coming down and the entire thing is produced in one shot. You have a bi-layered structure with light-absorbing graphene oxide filled nanocellulose at the top and pristine nanocellulose at the bottom".

Using the bilayer biofoam is also said to be extremely simple. It just requires suspending the material on the surface of the dirty water and the sun does the rest. The top layer of RGO/BNC captures the heat from sunlight and the bottom layer of pure BNC draws water from underneath while shielding it from the heat above.

“When you suspend this entire thing on water, the water is actually able to reach the top surface where evaporation happens,” said one of the scientists in the team. “Light radiates on top of it and it converts into heat because of the graphene oxide—but the heat dissipation to the bulk water underneath is minimized by the pristine nanocellulose layer.”

Since the biofoam is inexpensive to make and highly scalable, the technique is quite promising as a means of large-scale water purification. "We hope that for countries where there is ample sunlight, such as India, you'll be able to take some dirty water, evaporate it using our material and collect fresh water," said the team.