Graphene-perovskite solar farm trial up and running in Greece

An experimental graphene-based perovskite solar farm has been operating in Greece for several months, and early results are said to be very promising when it comes to power output and efficiency. 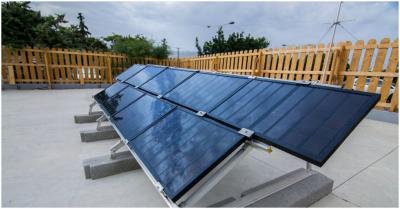 Located at the Hellenic Mediterranean University in Crete and spearheaded by the EU’s Graphene Flagship, the new solar farm consists of nine grapheneperovskite panels with a total area of 4.5m2 and a total output of approximately 261 watt-peak (Wp).

Emmanuel Kymakis, Professor at the Department of Electrical & Computer Engineering of the Hellenic Mediterranean University (HMU), Vice-President of the HMU Research Center and Director of the interinstitutional Post-Graduate Program Nanotechnology for Energy Applications, stated that the solar panels have been in continuous operation since June. A full year of operation will be needed before all the results can be shared, but Kymakis reported that the ‘preliminary results are very promising’.

He said grapheneperovskite photovoltaics (G-PE PVs) exhibit superior performance to conventional PV panels at high temperature conditions, and when it comes to stability only a small amount of degradation was observed after three months.

The autonomous solar farm system launched in January 2020. Efforts to test and optimise it took place through June 2020, and since then it has operated at full capacity.

Each graphene-perovskite module incorporates graphene and related 2D materials such as molybdenum disulfide, which helps to significantly increase the device’s performance and stability. The active layer of the panels is a mixed triple cation lead halide perovskite.

The novel solar farm was built at the Hellenic Mediterranean University in collaboration with the University of Rome Tor Vergata and the Italian Institute of Technology in Italy, as well as GreatCell Solar Italia and the University of Cambridge. The cost of the grapheneperovskite panels compares favorably with those of other solar cells.

"New PV technologies are required to continue cost reduction as well as to overcome the current theoretical efficiency limits", Kymakis explains. G-PE PVs take less energy and materials to produce, compared with conventional PV, and the low cost and high-speed production methods should significantly cut the price of solar modules, he adds.

Module efficiencies for G-PE PVs are expected to be comparable with existing photovoltaics technologies within five years, according to Kymakis. The corresponding LCoE values of commercial technologies like silicon, cadmium telluride and copper indium gallium selenide vary between â¬0.050.10/Wp (£0.040.09/Wp), he notes.

G-PE PVs can also be used as an additional PV element on top of existing technologies, such as tandem silicon modules. "This approach will yield module efficiencies above 30%, which in turn will further lower the LCoE", says Kymakis. He suggests that G-PE PV modules can likely get the LCoE cost down to â¬0.10/Wp and maybe even to â¬0.04/Wp.

"We have very good results that our technology is competitive in terms of power", Kymakis stated. He added that he’s ‘very confident’ that manufacturing costs will be low enough to ‘open the way to the commercialization of this technology’.