What is a sensor?

A sensor is a device that detects events that occur in the physical environment (like light, heat, motion, moisture, pressure, and more), and responds with an output, usually an electrical, mechanical or optical signal. The household mercury thermometer is a simple example of a sensor - it detects temperature and reacts with a measurable expansion of liquid. Sensors are everywhere - they can be found in everyday applications like touch-sensitive elevator buttons and lamp dimmer surfaces that respond to touch, but there are also many kinds of sensors that go unnoticed by most - like sensors that are used in medicine, robotics, aerospace and more.

Traditional kinds of sensors include temperature, pressure (thermistors, thermocouples, and more), moisture, flow (electromagnetic, positional displacement and more), movement and proximity (capacitive, photoelectric, ultrasonic and more), though innumerable other versions exist. sensors are divided into two groups: active and passive sensors. Active sensors (such as photoconductive cells or light detection sensors) require a power supply while passive ones (radiometers, film photography) do not.

Where can sensors be found?

Sensors are used in numerous applications, and can roughly be arranged in groups by forms of use:

Graphene is a two-dimensional material made of carbon atoms, often dubbed “miracle material” for its outstanding characteristics. It is 200 times stronger than steel at one atom thick, as well as the world’s most conductive material. It is so dense that the smallest atom of Helium cannot pass through it, but is also lightweight and transparent. Since its isolation in 2004, researchers and companies alike are fervently studying graphene, which is set to revolutionize various markets and produce improved processes, better performing components and new products.

Graphene and sensors are a natural combination, as graphene’s large surface-to-volume ratio, unique optical properties, excellent electrical conductivity, high carrier mobility and density, high thermal conductivity and many other attributes can be greatly beneficial for sensor functions. The large surface area of graphene is able to enhance the surface loading of desired biomolecules, and excellent conductivity and small band gap can be beneficial for conducting electrons between biomolecules and the electrode surface. 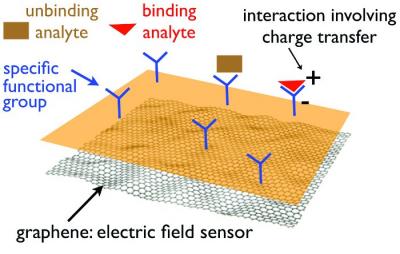 Graphene is thought to become especially widespread in biosensors and diagnostics. The large surface area of graphene can enhance the surface loading of desired biomolecules, and excellent conductivity and small band gap can be beneficial for conducting electrons between biomolecules and the electrode surface. Biosensors can be used, among other things, for the detection of a range of analytes like glucose, glutamate, cholesterol, hemoglobin and more. Graphene also has significant potential for enabling the development of electrochemical biosensors, based on direct electron transfer between the enzyme and the electrode surface.

Graphene will enable sensors that are smaller and lighter - providing endless design possibilities. They will also be more sensitive and able to detect smaller changes in matter, work more quickly and eventually even be less expensive than traditional sensors. Some graphene-based sensor designs contain a Field Effect Transistor (FET) with a graphene channel. Upon detection of the targeted analyte’s binding, the current through the transistor changes, which sends a signal that can be analyzed to determine several variables.

Commercial activities in the field of graphene sensors

In June 2015, A collaboration between Bosch, the Germany-based engineering giant, and scientists at the Max-Planck Institute for Solid State Research yielded a graphene-based magnetic sensor 100 times more sensitive than an equivalent device based on silicon.

In August 2014, the US based Graphene Frontier announced raising $1.6m to expand the development and manufacturing of their graphene functionalized GFET sensors. Their “six sensors” brand for highly sensitive chemical and biological sensors can be used to diagnose diseases with sensitivity and efficiency unparalleled by traditional sensors.

In September 2014, the German AMO developed a graphene-based photodetector in collaboration with Alcatel Lucent Bell Labs, which is said to be the world’s fastest photodetector.

In November 2013, Nokia’s Cambridge research center developed a humidity sensor based on graphene oxide which is incredibly fast, thin, transparent, flexible and has great response and recovery times. Nokia also filed for a patent in August 2012 for a graphene-based photodetector that is transparent, thin and should ultimately be cheaper than traditional photodetectors.

A research team at South China University of Technology, Peking University and other China-based universities have developed an accurate, rapid, and portable electrical detector based on the use of graphene field-effect transistors (G-FETs) for detection of RNA from COVID-19 patients. 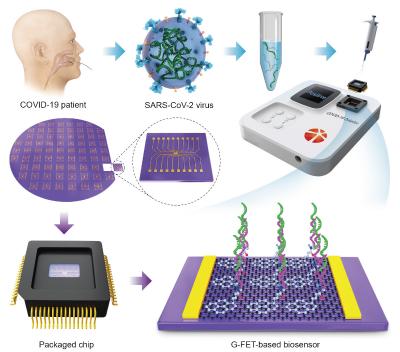 The detection system consists of two main parts: a plug-and-play packaged biosensor chip and an electrical measurement machine. The unique feature of this method is that the extent of hybridization between the ss-DNA probe and viral RNA can be directly converted to the current change of graphene channels without repetition of the PCR process. Furthermore, this method was validated using clinical samples collected from many patients with COVID-19 infection and healthy individuals as well, and the testing results were in full agreement with those of PCR-based optical methods.

Cardea Bio Adds $6.5 Million to its Series A fund raise

Cardea Bio, Inc., U.S-based manufacturer of a biology-enabled transistor technology made from graphene-based biosensors, recently raised $6.5 Million in a series A extension that brings its A round total above $20M.

The new capital infusion is led by the life sciences and biotechnology focused investor 3E Bioventures Capital and joined by existing investors. Proceeds from the financing will be used to further develop Cardea’s proprietary Transistor platform, in order to significantly expand mass-manufacturing and further grow Cardea’s number of commercial partnerships.

Sparc Technologies, which recently announced the acquisition of Australian company Graphene Technology Solutions (GTS) as well as its plan to become a “significant developer of graphene-based products that will disrupt and transform industrial markets”, has established a new graphene bio-medical division aimed at developing non-invasive graphene-based breath sensing devices for detection of diseases in humans and animals.

Sparc will advance the project together with cornerstone shareholder, strategic partner and leading graphene research centre the University of Adelaide (UA) in order to establish and develop non-invasive sensing devices for human and veterinarian applications.

Covid-19 and graphene, a current overview

The Coronavirus pandemic has been having a significant impact on the graphene market and industry. Even before the pandemic, graphene has already received much attention due to promising antimicrobial properties and demonstrated antiviral efficacy. However, there is no denying the recent urgency to put these traits to good use in combating the Coronavirus.

More than a few companies have launched graphene-enhanced textiles, inks and coatings, incorporated into personal protective gear (face masks, gloves etc.), and applications like air filters and room cleansers have been developed.

University of Illinois researchers have used graphene to develop a rapid, ultrasensitive test using a paper-based electrochemical sensor that can detect the presence of the virus in less than five minutes. 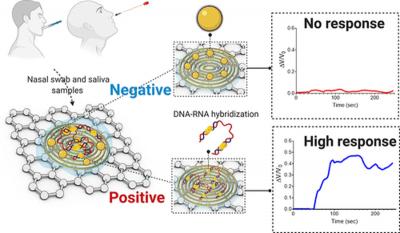 “Currently, we are experiencing a once-in-a-century life-changing event,” said bioengineering graduate student and co-leader of the study, Maha Alafeef. “We are responding to this global need from a holistic approach by developing multidisciplinary tools for early detection and diagnosis and treatment for SARS-CoV-2.”