ICFO to demonstrate graphene wearables and sensors at MWC 2019

The MWC 2019 is the world's largest event for the mobile industry, organized by the GSMA. It features a large exhibition, conference programme and networking opportunities. The Graphene Flagship partners with the MWC event and will host a graphene pavilion in the exhibition to showcase graphene materials and developers. 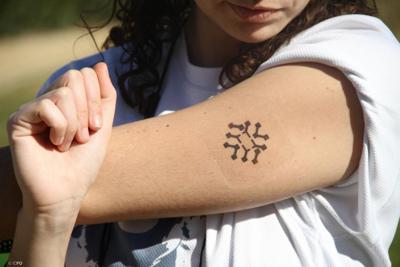 This year, one of the exhibitors in the Graphene Pavilion will be ICFO, showcasing prototypes like health monitoring wearables, next-generation tiny spectrometers and camera sensors.

The wearables to be demonstrated will reportedly of the kind that can be worn directly on the skin, rather than the bulkier smartwatches and fitness bands in current use. This dermal patch-like nature means that the emerging type of wearable may obtain improved readings for the health metrics that they are intended to monitor.

ICFO envisages that graphene will be used in situations where measuring hydration or blood oxygen levels may become paramount. Therefore, they may be used by people placed under extreme conditions, such as the Earth’s poles, significant altitudes, or in remote forests far from civilization. People in these conditions could apply a patch which is made of a specific conformation of graphene that forms components such as sensors, circuits or even batteries to the skin, in an appropriate location.

This patch would be capable of pairing with a smartphone (graphene can help form radios too) for real-time notifications when the user is at risk of dehydration or another potentially severe form of medical status. Therefore, technologies such as these could be the future of health tracking electronics.

On the other hand, ICFO also suggests that these patches may be disposable; it is to be hoped that all of their components, including any adhesives necessary, are biodegradable or environmentally-friendly in some other way.

ICFO’s graphene-based offerings extend even further beyond this development. The researchers claim that their work has resulted in the world's smallest single pixel spectrometer. These, together with the Institute’s new multi-spectrum spectrometer, could revolutionize the equipment used to analyze substances such as food or even pharmaceutical products for contamination or quality.

Like most graphene-based tools, these image sensors exist as ultra-thin sheets of nano-carbon lattices. This means that they can be integrated into camera modules very easily, while greatly enhancing their capabilities and functions.

ICFO stated that their sensors are ready for placement into many CMOS array types, even those small enough to fit into smartphones. Therefore, the mobile device users of the future could point them at things that they want to investigate. This may enable them to determine the freshness of foodstuffs in front of them, as well as to analyze the actual contents of a liquid or perhaps even an ingestible capsule at some point.

ICFO also intends to direct its new camera-related technology in the automotive industry. This may result in next-generation vehicles that can ‘sense’ their surroundings in more sophisticated ways. For example, graphene-enhanced car-cams could work out and display the obstacles and potential dangers in conditions of heavy fog. This could be done by analyzing the visible and non-visible spectra emitted by various objects, including plants, road surfaces, barriers, and other vehicles.