Researchers at MIT have developed a novel graphene-assisted method to convert temperature fluctuations into electrical power. Thermoelectric devices usually generate power when one side of the device is a different temperature from the other. In the team's design, however, instead of requiring two different temperature inputs at the same time, the new system takes advantage of the swings in ambient temperature that occur during the day-night cycle. 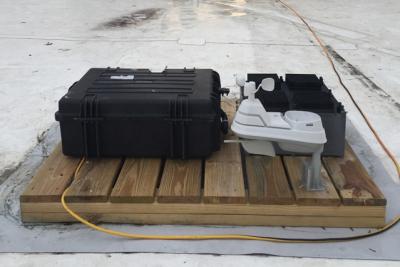 The new system, called a thermal resonator, could enable continuous, years-long operation of remote sensing systems, for example, without requiring other power sources or batteries, the researchers say.

While the power levels generated by the new system so far are modest, the advantage of the thermal resonator is that it does not need direct sunlight; it generates energy from ambient temperature changes, even in the shade. That means it is unaffected by short-term changes in cloud cover, wind conditions, or other environmental conditions, and can be located anywhere that’s convenient — even underneath a solar panel, in perpetual shadow, where it could even allow the solar panel to be more efficient by drawing away waste heat, the team says.

The thermal resonator was shown to outperform an identically sized, commercial pyroelectric material — an established method for converting temperature fluctuations to electricity — by factor of more than three in terms of power per area.

The researchers realized that in order to produce power from temperature cycles, they needed a material with thermal effusivity — a property that describes how readily the material can draw heat from its surroundings or release it. Thermal effusivity combines the properties of thermal conduction (how rapidly heat can propagate through a material) and thermal capacity (how much heat can be stored in a given volume of material). In most materials, if one of these properties is high, the other tends to be low.

To tackle this issue, the team created a carefully tailored combination of materials. The basic structure is a metal foam, made of copper or nickel, which is then coated with a layer of graphene to provide even greater thermal conductivity. Then, the foam is infused with a kind of wax called octadecane, a phase-change material, which changes between solid and liquid within a particular range of temperatures chosen for a given application.

A sample of the material made to test the concept showed that, simply in response to a 10-degree-Celsius temperature difference between night and day, the tiny sample of material produced 350 millivolts of potential and 1.3 milliwatts of power — enough to power simple, small environmental sensors or communications systems.

“The phase-change material stores the heat,” says the team, “and the graphene gives you very fast conduction” when it comes time to use that heat to produce an electric current. Essentially, one side of the device captures heat, which then slowly radiates through to the other side. One side always lags behind the other as the system tries to reach equilibrium. This perpetual difference between the two sides can then be harvested through conventional thermoelectrics. The combination of the three materials — metal foam, graphene, and octadecane — makes it “the highest thermal effusivity material in the literature to date,” the team says.

While the initial testing was done using the 24-hour daily cycle of ambient air temperature, tuning the properties of the material could make it possible to harvest other kinds of temperature cycles, such as the heat from the on-and-off cycling of motors in a refrigerator, or of machinery in industrial plants. “We’re surrounded by temperature variations and fluctuations, but they haven’t been well-characterized in the environment,” the researchers say. This is partly because there was no known way to harness them.

Other approaches have been used to try to draw power from thermal cycles, with pyroelectric devices, for example, but the new system is the first that can be tuned to respond to specific periods of temperature variations, such as the diurnal cycle, the researchers say.

Such systems could also provide low-power but long-lasting energy sources for landers or rovers exploring remote locations, including other moons and planets, says an MIT postdoc and co-author of the new study. For such uses, much of the system could be made from local materials rather than having to be premade, he says.

The work was supported by the Office of Naval Research, KAUST, and the Swiss National Science Foundation.