UK-based scientists from BAE Systems and the University of Surrey have discovered that patterned graphene sheets, inspired by moths’ eyes, could be used to capture light to produce energy or power sensors, and could also be used to develop “smart wallpaper” capable of powering Internet of Things applications. 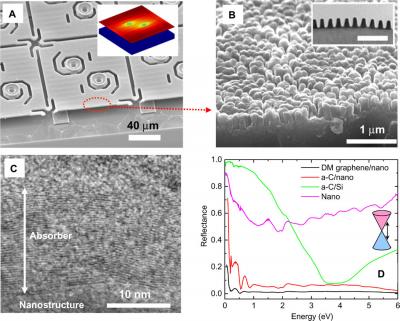 The researchers claim that the newly developed material is the most light-absorbent substance for its weight developed to date, and drastically improves the efficiency of traditional graphene. They explain that graphene typically absorbs just 2.3% of incidental light; However, their new version of the material could collect as much as 90% more waste light and heat to produce more energy. The difference is a new technique which grows graphene around a textured metallic surface.

It appears that moths’ eyes have microscopic patterning that allows them to see in very dim conditions. They function by directing light towards the center of the eye while also eliminating reflections. The researchers realized that enhancing graphene's ability to collect heat and light would help it reach its full potential in future technological innovations such as smart wallpaper or windows, solar cells, sensors, or energy harvesters for Internet of Things instruments. Thus, the process in this study, known as nanotexturing, was inspired by this property of moths’ eyes to create an ultrathin version of the material by using nano-patterns to localize light into the narrow area between the textured surface of the graphene.

The researchers state that their next step is to incorporate this material in a variety of existing and emerging technologies, and that they are very excited about the potential to exploit this material in existing optical devices for performance enhancement, whilst looking towards new applications.