Researchers from Virginia Tech and Lawrence Livermore National Laboratory have developed a new way to 3D print with graphene. Graphene has previously been used in extrusion-based processes to print single sheets and basic structures at a resolution of around 100 microns, but this latest research shows it is also possible to use a stereolithography-based technique to print “pretty much any desired structure” down to 10 microns, close to the size of actual graphene sheets. The ability to 3D print functional parts in graphene could benefit many industries and products. 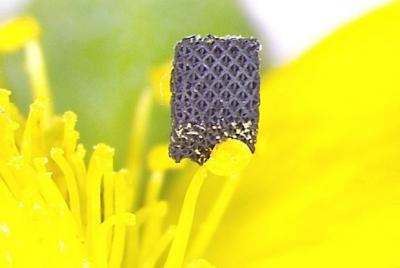 “Now a designer can design three-dimensional topology comprised of interconnected graphene sheets,” said Xiaoyu “Rayne” Zheng, assistant professor with the Department of Mechanical Engineering in the College of Engineering and director of the Advanced Manufacturing and Metamaterials Lab. “This new design and manufacturing freedom will lead to optimization of strength, conductivity, mass transport, strength, and weight density that are not achievable in graphene aerogels.”

This project began three years ago, led by Ryan Hensleigh during an internship at the Lawrence Livermore National Laboratory where he worked with Zheng, then a member of the technical staff at the lab. Hensleigh started with graphene oxide, crosslinking the sheets to form a porous hydrogel. Breaking the graphene oxide hydrogel with ultrasound and adding light-sensitive acrylate polymers, Hensleigh used projection micro-stereolithography to create the desired solid 3D structure with the graphene oxide trapped in the acrylate polymer. Hensleigh then placed the 3D structure in a furnace to burn off the polymers and fuse the object together, leaving behind a pure and lightweight graphene aerogel.

Zheng commented that this technique allowed the team to engineer layers of graphene into any desired freeform shape with a high resolution. “We’ve been able to show you can make a complex, three-dimensional architecture of graphene while still preserving some of its intrinsic prime properties,” Zheng said. “Usually when you try to 3D print graphene or scale up, you lose most of their lucrative mechanical properties found in its single sheet form.”